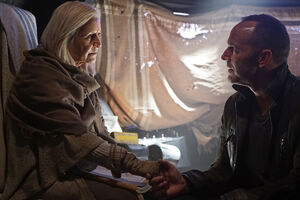 When you destroy the world, you remember this moment... remember I tried to stop you.

Appearing in "The Last Day"

Synopsis for "The Last Day"

Robin Hinton, now in S.H.I.E.L.D. custody since her mother's death, survives the Zephyr's crash during the cataclysm in 2018 that ripped the Earth in half. Years later, she is living with surviving S.H.I.E.L.D. agents - including May, FitzSimmons, and Yo-Yo - in the Lighthouse. FitzSimmons try to build a time machine from schematics Robin saw in her visions, but Fitz is skeptical that it's even possible to change time. They're forced to accept the Kree's dominion over the Lighthouse as the bunker's life support systems begin to fail. However, Yo-Yo refuses to submit to the Kree and goes to confront them, only to never return. Over the years, May raises Robin as if she were her daughter, especially as others grow tired of trying to make sense of Robin's visions. Robin tries to tell her one night about how she is supposed to get home, but May makes her promise to wait to tell her when they're back together on the plane.

After crash-landing on the Earth's surface, Coulson, Daisy, Deke and FitzSimmons make their way to the Zephyr's wreckage, where Robin Hinton and others the Kree exiled from the Lighthouse have set up camp. Voss, the leader of the scavengers who live there, recognizes Deke based on his likeness to his father, who Voss says is currently at another outpost. FitzSimmons discover the machine the scavengers used to send them through time - the same machine their counterparts tried to build in the past, since completed by Deke's father. Deke recognizes the chunk of the monolith used to power the machine as one of his mother's possessions, one his father would've never voluntarily left behind. Voss knocks Deke out when he confronts the scavenger over what really happened to his father.

Kasius orders his men to direct the Vrellnexians to the levels of the Lighthouse inhabited by humans as "retribution" for S.H.I.E.L.D.'s actions. Mack, Yo-Yo and Flint realize what the Kree are up to when they run into none of the roaches when they retrieve the weapons Fitz stored on Level 3. They hurry to the Exchange, but the roaches have already killed several people. The three of them work together to drive back the Vrellnexians, and begin removing the survivors' metrics so they are no longer enslaved to Kasius.

Meanwhile, S.H.I.E.L.D. has had little success in getting Robin to tell them how they can return to their own time. Daisy tries to appeal to the promise she made to Robin's father, but to no results. Voss shows Daisy the last known footage of her before she supposedly destroyed the Earth. The scavengers attempt to kill Daisy before she causes all this, but when she proves too difficult to kill, Voss instead stabs Robin so she cannot tell them how to return to their own time. Once Voss and his goons are taken down and disarmed, May consoles Robin in her final moments. Robin tells May about how she raised her, and whispers in her ear how they can still return home. May, confused by what Robin told her, asks everyone "Who's Flint?"

Sinara finds the remains of the downed Trawler and reports to Kasius. He orders her to follow their trail, and show them no mercy. 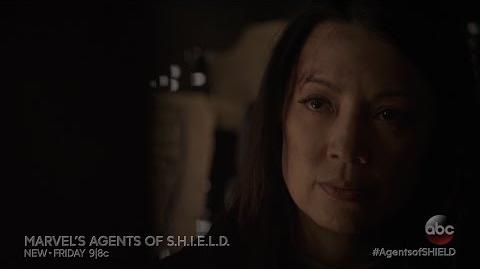 Like this? Let us know!
Retrieved from "https://marvel.fandom.com/wiki/Marvel%27s_Agents_of_S.H.I.E.L.D._Season_5_8?oldid=6498218"
Community content is available under CC-BY-SA unless otherwise noted.