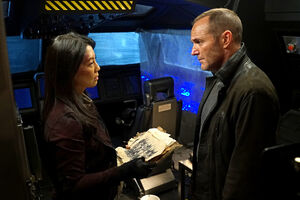 Mack, Yo-Yo and Flint launch a revolution against the Kree by fighting a team of Kree Reapers. When Kasius gets word of this, he puts in place a plan to detonate bombs to destroy several levels of the Lighthouse if the humans do not turn Flint over to him. Kasius sends Tess - recently revived by Kree blood - to deliver his message to the rebellious humans. Mack attempts to disarm the bombs, but soon realizes this will take too long to be an effective countermeasure to Kasius' plans. Mack and Yo-Yo send Tess back to Kasius to tell him that if he doesn't meet with them, they'll destroy genetic samples and Terrigen crystals that allow the Kree to produce new humans and Inhumans. Kasius reluctantly agrees to meet with Mack and Yo-Yo in person, taking Tess and a few Kree reapers with him for security. While the S.H.I.E.L.D. agents keep Kasius talking, Gunner and a few others move the bombs to a lower level of the Lighthouse while moving the rest of the humans further up. After Flint gives them word that everything is in place, Yo-Yo goads Kasius into detonating his bombs. The humans are far enough away from the explosion. Once Kasius realizes his plan has failed, Mack, Yo-Yo, Flint and Tess escape behind an explosion of their own, leaving behind a furious Kasius.

A Kree Reaper is about to inform Kasius about the approaching S.H.I.E.L.D. plane when he reveals he is already aware of this development. When the Reaper asks how he knows this, Kasius says he has a seer of his own. 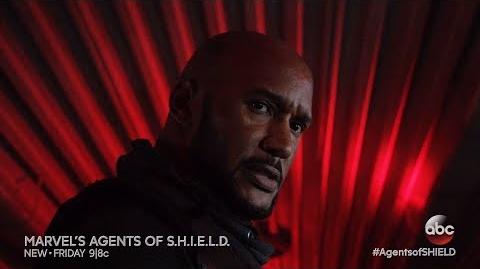 Retrieved from "https://marvel.fandom.com/wiki/Marvel%27s_Agents_of_S.H.I.E.L.D._Season_5_9?oldid=5598999"
Community content is available under CC-BY-SA unless otherwise noted.