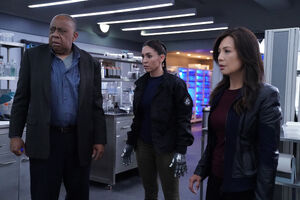 In the depths of space, Enoch considers bringing Fitz out of his cryo-sleep as his ship is threatened by a spinning beam of energy. The beam crosses through the ship, cutting it in half. One year later, a team consisting of Daisy, Simmons, Piper and Davis find the wreckage of Enoch's ship on an alien world. After beating up some aliens they suspect might have done something with Fitz and Enoch, they explore the abandoned wreckage and find Fitz's pod empty. Heartbroken by coming to what appears to be a dead end, Simmons crawls inside the pod. She finds alien inside the pod, which after translating turns out to be the name of the planet where the pod was built. Simmons thinks Fitz would have gone to this planet, as it would give him the best chance at being frozen again. The rest of the team, however, doesn't want to make another jump to an unknown world, and thinks the best move is to return to Earth. A Confederacy destroyer suddenly jumps to their location. The destroyer spots the Zephyr despite the team's best attempts to hide. Right before they make their jump to escape the Confederacy, Simmons reveals she put in the coordinates for the planet she thinks Fitz fled to instead of Earth.

On Earth, Mack - now director of S.H.I.E.L.D. - readies multiple teams for a distortion in reality to appear. One of these happens in a park in Indiana. A large man, Jaco, walks through a wall, although his partner, Tinker, is less fortunate and is fused with the concrete. A team led by Agent May arrives on the scene in a quinjet. They attempt to engage Jaco from the air, but he uses a powerful blaster to shoot down the quinjet. The teams regroup at the Lighthouse, where agents Keller and Fox share a theory that the locations of these incidents all sit along laylines, paths of energy various ancient cultures believed in. Mack and May recruit Dr. Marcus Benson, a professor at Culver University, to look into these distortions (and possibly restart S.H.I.E.L.D. Academy). Benson looks at the wall with Tinker still fused to it, and notices what appears to be a lens on Tinker's neck. Tinker suddenly revives and grabs Dr. Benson, warning him and the agents of S.H.I.E.L.D. about the coming "Pachakutiq." Tinker dies soon afterwards, dropping a device holding coordinates for the Museum of Natural History in Muncie, Indiana. Meanwhile, Jaco picks up two more of his teammates in a forest. They go to the museum in Muncie to collect the leader of their team, Sarge, but S.H.I.E.L.D. is ready for them. As agents surround the building, Jaco's female accomplice pretends to be an innocent bystander and warns S.H.I.E.L.D. that her son is being held hostage. A beam of energy rips through the museum, destroying the building, taking out S.H.I.E.L.D.'s communications, and knocking the agents to the ground. Sarge drives a large truck through the distortion. When he steps out of the truck, the agents are surprised to see he looks exactly like the late Phil Coulson. Agent Fox grabs Sarge's henchman to protect himself. Sarge shoots him to free his henchman, and claims to have never heard of S.H.I.E.L.D.

Elsewhere, Fitz tinkers in a workshop, working for someone known as "the collector."

Retrieved from "https://marvel.fandom.com/wiki/Marvel%27s_Agents_of_S.H.I.E.L.D._Season_6_1?oldid=5741952"
Community content is available under CC-BY-SA unless otherwise noted.