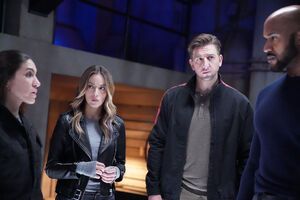 May is placed in holing for killing Sarge, and Sarge's body is taken to FitzSimmons' lab. FitzSimmons notice Sarge not only isn't dead, but his body is healing itself. The rest of the team notices May isn't acting herself - even by choosing to kill Sarge with a gun instead of her own hands. Yo-Yo goes into May's cell to question her, only to find May has no memory of what she did to put her in holding. She claims to have blacked out heading back to her quarters after the party. The last thing she remembers is running into Davis. Daisy finds Agent Diaz badly beaten-up in a hallway, herself having blacked-out while she was guarding May's cell. Yo-Yo and Daisy question Davis, who's still coming down from a hangover from the party. They find out the last thing Davis remembers before an oddly-helpful May helped him get back to his room was chasing after Izel with Jaco (who he doesn't even know is dead). Meanwhile, Piper steals a Shrike crystal from the lab and uses it as some sort of compass. Deke finds her and tries to warn her about how dangerous Shrike crystals are, but suddenly Izel comes out of Piper's body and possesses Deke's. The crystal leads Izel/Deke to a heavily-guarded door that only Mack could get through.

Daisy, Yo-Yo and Davis warn Mack that Izel can leap between bodies and is the one who really shot Sarge. Mack puts the Lighthouse on lockdown, locking himself, the three of them, May, Fitz, and Deke in the control room. Everyone in the room needs to prove they're not possessed by Izel by sharing their own or verifying another person's secret, as Izel does not have access to her victims' memories when she possesses them. Once Daisy and Yo-Yo are both cleared, Mack locks them in a side office so Izel can't possess their bodies and gain access to their powers. Piper comes out of hiding and accuses Deke of being Izel. While Deke and Piper fight over which of them is really Izel, Mack becomes suspicious of Fitz. Izel is revealed to be possessing Fitz when he cannot answer where Simmons was undercover when he and Mack first met. She leaps back into Piper's body, and shoots a hole in her hand to make a point of what she can do if anyone stands in her way. Mack tells Davis to shoot her anyway, but Izel leaps from body-to-body to take over Davis again. She reiterates her point by forcing Davis to fall off a balcony head-first, killing him. Izel then takes over Mack's body and holds a gun to his head as she leaves the control room.

Knowing she was after the Monoliths before, Fitz theorizes she still is even though they've been destroyed. The light they left behind that the other Fitz thought was an opening to a "fear dimension" is actually the energy that was contained within the monoliths. He remembers Izel said the Monoliths had the power to "create," so the third Monolith must have had the power of creation. When Coulson encountered the light to contain it with a gravitonium device, the Monoliths' combined energy created another Coulson - Sarge - across space and time, on another planet far in the past. Izel uses Mack's body to unlock the door to the sealed Monolith energy, and then makes him knock himself out by hitting his head on a pipe. As Izel approaches the gravitonium device, she's suddenly ambushed by Sarge, who recently escaped from the lab. She says he isn't there to stop her, but to join her. Izel reveals she and Sarge are both non-corporeal beings from another world. While Izel was one of the few of her kind to give herself a form, Sarge possessed the body of the other Coulson the Monoliths created. Coulson's memories overtook Sarge's own, and his memories of his family are actually Coulson's memories of his team. Sarge's real name is "Pachakutiq," and this is all his plan. Together, he and Izel would use the Monoliths to bring their people into the physical world to inhabit the billions of willing host bodies created by the Shrike. Sarge, however, refuses to believe Izel, and swears he will stop her.

Daisy and Yo-Yo try to stop Izel before she can leave with the gravitonium device. Yo-Yo uses her speed to take it away from her, but ends up running into Izel's non-corporeal form and is possessed. Rather than put up a fight, Mack chooses to let Izel take his plane as long as he goes with her. As they watch the Zephyr fly away with Mack and Izel/Yo-Yo, May tells Daisy Mack isn't surrendering but trusting his team. Later, Fitz and Deke observe footage of Sarge and Izel's confrontation. Fitz finds Izel's description of her people similar to the Ghost Rider. He realizes if Sarge is anything like that, however, his holding cell won't hold him for long. Meanwhile, as Sarge paces in his cell, his body starts to change.

Retrieved from "https://marvel.fandom.com/wiki/Marvel%27s_Agents_of_S.H.I.E.L.D._Season_6_10?oldid=5741947"
Community content is available under CC-BY-SA unless otherwise noted.