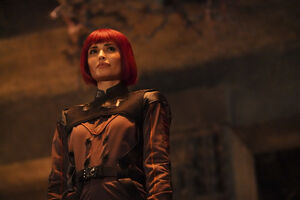 Episode Title
"From the Ashes"

Appearing in "From the Ashes"

Synopsis for "From the Ashes"

Izel takes over Mack's body, and tricks Yo-Yo into revealing that Dr. Benson knows the location of a temple where she can open a gateway for her people to come through. After the Zephyr picks up Dr. Benson and his assistant, Yo-Yo tips off Benson that something's wrong with Mack by pretending Keller is still alive. Izel kills Benson's assistant and places Yo-Yo and Mack in the containment unit after she realizes they're trying to trick her. To convince Benson to work with her, she uses the energy of the creation monolith trapped within the gravitonium device to briefly bring Benson's memories of his dead husband Thomas to life. After "Thomas" recounts the moments that Bensen sat at his side while comatose, Izel then kills him and threatens to resurrect and kill Thomas repeatedly until Benson gives in. Once Benson has given up the location of the temple, Izel places Benson in the pod with Yo-Yo and Mack. Yo-Yo takes advantage of Izel opening the pod door to grab the gravitonium device with her Inhuman speed. Izel takes over Yo-Yo's body, but Mack runs out of the pod and drops it out of the plane with Dr. Benson still inside so the team at the Lighthouse can pick up his location and find the temple.

At the Lighthouse, the S.H.I.E.L.D. team is unsure of what to do with Sarge and how to stop Izel, while Sarge himself struggles to come to terms with his true identity as Pachakutiq. May tries to interrogate Sarge, but he rightly points out that May still sees too much of Coulson in him. Daisy fights back her feelings about Coulson's death, and tries to force Sarge to become what he truly is. She recognizes how Izel was able to awaken some of his (in reality, Coulson's) memories by almost killing him, so she breaks Sarge's neck with her powers with the hope that it will bring out more of Sarge's true self. Her plan is successful, and Sarge has superhuman strength once his body heals. However, his body also becomes unstable and parts of it turn into ash whenever he summons his strength. While Sarge goes on a rampage through an empty part of the Lighthouse, Daisy grabs the sword he planned to kill Izel with so she can kill him. Before she can use the sword on him, Daisy realizes Sarge does indeed have Coulson's memories when he calls her "Skye." He wants Daisy to kill him before Izel's song can take over his head - exactly what Coulson would have wanted her to do. Instead of killing him, Daisy embraces Sarge as Coulson brought back from the dead. Deke hears Sarge's comment about Izel's "song," and realizes her various abilities work by manipulating harmonic frequencies just like the monoliths. Sarge's knives and sword disrupt those frequencies, so if he can recreate that effect, S.H.I.E.L.D. could mass produce weapons to be used against Izel and her people.

Izel arrives at the ancient, abandoned temple where she will open the portal to bring the rest of her people into the physical world. She chains Mack and Yo-Yo to a pillar while she opens up the gravitonium device to start the ritual. Izel, however, needs the physical Monoliths for this to work. Mack and Yo-Yo refuse to let Izel use their memories to rebuild them. Just as Mack finishes pointing out that the Monolith energy would not be able to build the Monoliths out of their fears, Izel shows them the energy has somehow brought Flint to the temple. In the depths of space, the Chronicoms have successfully used the information combined from FitzSimmons to perfect time travel. However Malachi suggests they establish a new homeworld, Chronyca-3, by conquering another planet, as a backup plan, but Atarah refuses. Deciding she's too inflexible, Malachi and the Chronicom hunters overthrow Atarah for holding back their plans.

Retrieved from "https://marvel.fandom.com/wiki/Marvel%27s_Agents_of_S.H.I.E.L.D._Season_6_11?oldid=5741916"
Community content is available under CC-BY-SA unless otherwise noted.