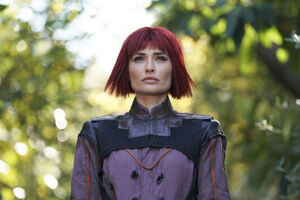 I went to enough Sunday school to know that when the devil shows up, he'll be wearing the face of someone you trust!

Izel possesses Flint's body and uses his geokinetic abilities to rebuild the three Monoliths. She then steps outside of the temple and releases a swarm of Shrike to find host bodies to her people. Flint, although too weakened to destroy the Monoliths, frees Mack and Yo-Yo. Izel catches them before they can escape, and crushes Flint's knee after she possesses Yo-Yo's body to prevent them from escaping. At the lighthouse, Daisy prepares to lead a team consisting of herself, May, Piper, and Sarge to stop Izel. Deke, to everyone's surprise, was able to quickly mass-produce special wristbands that will prevent Izel from taking over the body of anyone who wears them. FitzSimmons melted down Sarge's knives to create bullets that can kill the Shrike - and possibly Izel. On the quinjet, May confesses to Daisy that she's holding out hope for a way to bring Coulson back by separating Sarge from Pachakutiq.

The team finds the Zephyr abandoned in the jungle. While Piper stays behind to get the plane flying again, the rest of the team find themselves surrounded by Shrike-zombies. After fighting off one group of them, Daisy separates from May and Sarge to create a distraction, leading them away from the temple. Meanwhile, Deke shows FitzSimmons exactly how he was able to produce the wristbands so quickly - he's brought much of his startup's staff to the Lighthouse and set up shop on an unused floor, where they "develop" technologies based on stolen S.H.I.E.L.D. technology. One of their creations is the "Shaw Drive," a portable version of the Remorath jump drive. Even though FitzSimmons are horrified by what Deke is doing behind their backs, they agree to help him perfect the Shaw Drive so an agent can teleport into the temple with the rest of the team. Deke gets so frustrated with the way his own grandparents dismiss his achievements he impulsively straps the Shaw Drive to his back and tests it on himself.

Deke is suddenly transported into the temple. He places the wristbands on Mack, Yo-Yo, and Flint, and then helps them escape by leading the Shrike-zombies away from them. Unfortunately for him, Deke miscalculated how much energy one jump takes out of the drive, leaving him stranded inside the temple with the zombies and Izel. While Izel activates the Monoliths with her song, Deke places a camera in the portal room, giving the Lighthouse a view inside the temple. Mack, Yo-Yo and Flint make it to the Zephyr, where they're met by Piper. Mack orders Piper to take the quinjet to get herself and Flint to safety. Daisy runs onto the Zephyr not long afterwards, still being chased by Shrike-zombies. With it still unable to fly, they are forced to barricade themselves inside the plane. Mack is furious that Daisy would so easily trust Sarge to help them stop Izel when she tells him their plan.

Meanwhile, Izel has finished creating the portal to her home dimension. May and Sarge face Izel inside the temple. Izel lets Sarge think he's beaten her, only to point out that he is unable to bring himself to kill her. May tries to appeal to Sarge's human side, the side that comes from Coulson, while Izel attempts to bring out Pachakutiq. When May wants Sarge to remember his (Coulson's) love for his team, Sarge decides to put an end to this seeming weakness of his by impaling May on his sword and throwing her through the portal.

On Kitson, Enoch meets with Isaiah, another Chronicom anthropoligist. Isaiah informs him that the other Chronicoms Enoch wanted him to find have all been reassigned as hunters, including Isaiah. Enoch is unprepared as Isaiah suddenly lunges at him.

Retrieved from "https://marvel.fandom.com/wiki/Marvel%27s_Agents_of_S.H.I.E.L.D._Season_6_12?oldid=5601825"
Community content is available under CC-BY-SA unless otherwise noted.