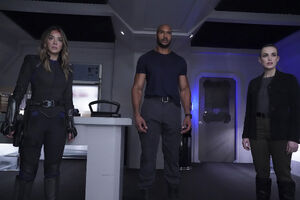 Through Deke's camera, FitzSimmons watch helplessly as Sarge kills May, and then informs Daisy, Mack and Yo-Yo about her fate. They barely have time to process what happens when the Lighthouse comes under assault from Malachi and the Chronicom Hunters. Malachi thinks S.H.I.E.L.D. is the only thing stopping them from turning Earth into Chronyca-3, so wiping them out is the first phase of their plans. The Chronicoms use the information they gathered from FitzSimmons' brain to overwhelm S.H.I.E.L.D.'s defenses, and execute agents like Trevor Khan before they can put up a fight against them. When they can't reach Enoch, FitzSimmons hide from the Chronicoms in Deke's lab, and plan to destroy everything inside - particularly the Framework, which still contains records of Coulson's mind - before they can find it and use the technology against S.H.I.E.L.D.. They are ready to sacrifice their own lives to save the rest of S.H.I.E.L.D. when a group of Hunters, including Isaiah, find them in Deke's lab. Isaiah suddenly turns on the other Hunters, revealing himself to be Enoch wearing Isaiah's skin. He has a plan to save them, but it requires FitzSimmons change the course of their lives.

While the rest of the team plans to get their revenge on Sarge for what he did to May, Deke makes his way to a quinjet and radios for help. With no way for them to get to Deke and their own defenses starting to give way, their only plan is for Deke to fly the quinjet to the Zephyr. The quinjet, however, is damaged, and Deke has to hold off some of the Shrike-zombies while he fixes it. Daisy and Yo-Yo discover the Shrike-zombies got into the plane's arsenal, but Yo-Yo uses her speed to shoot them before they can fire their own guns. Even things seem clear, a Shrike suddenly flies in and down Yo-Yo's throat. The team board the quinjet once Deke gets it to the Zephyr before taking off again to get closer to the temple. With only a limited amount of time before the parasite takes over Yo-Yo's body, Daisy hopes stopping Izel could save her.

May wakes up inside a temple Izel's world. Life and death are meaningless in this place, rendering her impalement little more than a flesh wound. Three figures - each correlating to a different Monolith - place tablets into grooves on an altar. The door to the outside, where Izel's people wait to cross over into the physical world, opens a little more with each tablet placed in the altar. May removes Sarge's sword from her body, and uses it to destroy the three spectres. Meanwhile, Sarge, seemingly in control of himself as Pachakutiq, remembers he sent Izel to find the Monoliths to make him whole again, and attacks her for taking so long to find them. When the three tablets are throne through the portal, Izel realizes May is still alive. She accuses Sarge of still being unable to throw off his human side, and goes through the portal to face May herself. Although May proves to be more than a match for Izel, but Izel is still able to place the tablets in the altar and through the portal where May cannot follow her without succumbing to her wounds.

The team, meanwhile, gets inside the temple. Deke stays behind to hold off any Shrike that might follow them while Daisy, Mack and Yo-Yo face Sarge to avenge May. Daisy uses her powers against Sarge, revealing the monstrous true form of Pachakutiq hidden beneath Coulson's flesh. Sarge easily shakes off Daisy's powers and throws her back. Yo-Yo tries to help Mack fight Sarge, but the Shrike inside her starts to overtake her body. Mack crawls over to Yo-Yo, and Daisy hands him the knife to finish her off. Before he can stab her with it, however, the Shrike gains control of Yo-Yo's body and attacks Mack. As Daisy prepares to take on Sarge, Izel walks through the portal behind her and prepares to attack. Suddenly, Izel is run through by Sarge's sword. May followed her through the portal at the cost of her own life. Yo-Yo is freed from the Shrike's control as she spits out its liquefied remains. Daisy pushes Sarge back, again revealing his true form, giving May an opening to toss the sword to Mack so he can finish off Sarge once and for all. The portal to the other world closes with Pachakutiq's death.

May starts to die, comforted by the fact that she might see Coulson again in death. Suddenly, a Simmons and a team of agents swarm the room. Simmons promises they will be able to heal May in a few hours while her team places her body in a cryo pod and takes samples of the Monoliths. Daisy, Mack, Yo-Yo and Deke follow Simmons onto the Zephyr. To their surprise, the plane is fully outfitted with new tech, including Deke's Shaw Drive. When asked, Simmons says they had time to do all this, and that she does not and cannot know where Fitz is. Simmons activates the Shaw Drive just as missiles sent by the Chronicoms destroy the temple. On the other end of the jump, Simmons calculates they are over New York City. The entire city is fogged over, but the Empire State Building is the only building above the clouds. The jump didn't just take them to New York, but also several decades into the past. Simmons reveals the Chronicoms have Fury's box and all of S.H.I.E.L.D.'s files. Their only chance to stop the Chronicoms from turning Earth into Chronyca-3 is to use an expert in S.H.I.E.L.D.'s history. To fill that role, Enoch used advanced Chronicom technology to create a new, fully-updated LMD of Phil Coulson.

Like this? Let us know!
Retrieved from "https://marvel.fandom.com/wiki/Marvel%27s_Agents_of_S.H.I.E.L.D._Season_6_13?oldid=6498224"
Community content is available under CC-BY-SA unless otherwise noted.