"Fear and Loathing on the Planet of Kitson" 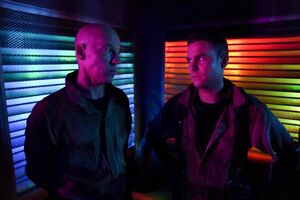 Episode Title
"Fear and Loathing on the Planet of Kitson"

What happens on the planet of Kitson.... is contagious and burns.

Appearing in "Fear and Loathing on the Planet of Kitson"

Synopsis for "Fear and Loathing on the Planet of Kitson"

A customs official demands to inspect the Zephyr once it completes its jump to the Naro-Atzia system. When the official asks why a group of humans would be so far away from Earth, Simmons - thinking he could help them - tells him they're looking for Fitz. Once she says his name, a self-described "hunter" named Malachi ambushes them and immobilizes Daisy and Piper with his gun. As Simmons finds herself in a standoff with this hunter, Davis gets behind Malachi and knocks him out. The team learns from Malachi that Fitz was scheduled to arrive on the next ship to approach Naro-Atzia, but flight records show his ship was redirected towards the planet of Kitson at the last second.

On Kitson, Fitz and Enoch are cheated out of their Xandarian snails in exchange for a chip they can use at the House of Games. Even though the casino bans androids, AIs, and other synthetic lifeforms, Enoch thinks his Chronicom design is so sophisticated he can pass for an organic. Enoch confesses to Fitz that he's come to think of him as his best friend, and Fitz thinks he can use his advanced computational abilities to win a lot of money gambling. He loses all his winnings when he falls for another player's bluff. With Fitz outright refusing to work at the brothels, the only way for them to earn enough money to leave the planet is for Fitz to play a high-stakes game similar to blackjack. Fitz will be sold into slavery if he loses, if the game doesn't kill him first. Enoch will help him cheat at this game by making a sound at a pitch only humans can hear instructing him if he should hit or stand.

The Zephyr arrives at Kitson. The team finds the con artists who cheated Fitz and Enoch, and force them to tell them where they can find their friends. Davis takes a jar of sweets from the crooks and eats a few before letting Daisy and Simmons each have one. What they don't know, however, is that the sweets are strong hallucinogens. The drugs start to hit Daisy and Simmons when they get to the casino. Although they're too stoned to effectively look for Fitz, they can tell he's there when they hear Enoch's tone. On the Zephyr, Davis is too high to notice Malachi slipping out of his restraints. Piper soon confronts Malachi interfacing with the Zephyr's systems. Davis then arrived and attempts to shoot at Malachi, but the hunter teleports away, resulting in Davis' bullet hitting the plane's fuses.

Fitz starts to get nervous when one of the gamblers at his table dies after making a bad bet. Enoch, however, is no longer making his sound. Suddenly, Enoch's body glows and emits a loud sound before collapsing. The casino realizes Enoch is a synthetic and throws him and Fitz into a cell with the dead gambler. After Fitz reboots his body, Enoch realizes he has been decommissioned for straying too far from his purpose, and hunters will be coming for him. Three more hunters arrive in the casino to find Enoch and Fitz. While Daisy fights the hunters, Simmons tries to talk a security guard into letting her find Fitz in one of the cells. Fitz convinces the depressed Enoch to help them escape, creating a spark that ignites the dead gambler's sulfuric blood, and blows out the door to the cell. Fitz and Simmons see each other for only a moment before Malachi suddenly appears, grabs Fitz, and takes him away using his teleporter. Enoch leaves the cell after Fitz, and asks Simmons why she's there.

On Earth, Sarge and Jaco fire Sarge's weapon into the sky, creating a grid that points them to various locations across the United States.

Retrieved from "https://marvel.fandom.com/wiki/Marvel%27s_Agents_of_S.H.I.E.L.D._Season_6_3?oldid=5601805"
Community content is available under CC-BY-SA unless otherwise noted.