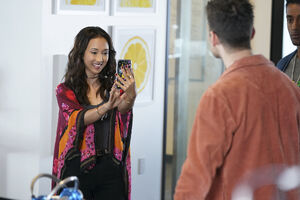 In the year since he left the Lighthouse, Deke has used his knowledge of S.H.I.E.L.D. and alien technology to become a successful tech developer in Silicon Valley. One of his creations is a Framework-powered VR game called "Remorath Rumble" where players fight simulated Remorath and Kree soldiers, and romance a sexualized avatar of Daisy Johnson. In Reno, Sarge and his team corner and kill a man who they say "doesn't belong there." Sarge stabs the man's torso with a special knife, and rock-like protrusions emerge from his body as he dies. At the Lighthouse, Mack stops Agent Keller from publicly admitting to his affair with Yo-Yo, if only so they can still work together in the field. They realize Sarge's weapon created a map for them, and Agent May retrieves the body of the man his team killed in Reno.

Deke becomes Sarge's next target. Sarge, posing as an investor, forces his way into Deke's offices. Although he at first confuses Sarge for Coulson, Deke realizes he is not who he seems just from talking to him. When Sarge goes in for the attack, Deke stabs his hand - the one that is supposed to be fake - with a trophy, proving he isn't Coulson when it bleeds. The rest of Sarge's team start opening fire on Deke's building. Deke himself is saved by Trevor Khan, an undercover S.H.I.E.L.D. agent tasked with keeping an eye on him by becoming one of his employees. A quinjet arrives with Mack, May, and a team of agents to stop the mysterious invaders. Although S.H.I.E.L.D. gets everyone to safety, Deke goes back inside when he realizes his social media influencer girlfriend came in through the back door and is completely unaware of what's going on. He finds her hiding in a bathroom, but as they try to run away they're ambushed by Pax. Mack helps Deke fight off Pax, but they're quickly found by Jaco. Deke and Mack lead Jaco on a chase through the building, ending with Deke tricking Jaco into entering his Framework game. May, meanwhile, fights Snowflake. Just as it seems she has Snowflake beaten, Sarge comes up behind her and holds a gun to her head. Sarge and Snowflake take May as their hostage, and bring her back to their truck.

Back at the Lighthouse, Dr. Benson conducts an autopsy on Sarge's victim. He finds Sarge's knife has stabbed a strange, bat-like parasite embedded in the corpse's chest cavity. They remove the knife to study it further, but the parasite comes back to life and flies away. The parasite flies into Keller's mouth while he and Yo-Yo are looking for it. They hurry back to the med bay, but Dr. Benson has no idea what to do for Keller's situation. He gives Keller a powerful sedative that only seems to help the parasite fully take control over his body. While trying to transport Keller (or at least what's left of him) to another part of the Lighthouse, Keller's body bursts out of its restraints. Keller's body begins to tear itself apart as much larger rock-like protrusions emerge from it and attach to the walls and floor of the hallway. Left with no other choice, Yo-Yo grabs Sarge's knife and drives it through Keller's chest.

Like this? Let us know!
Retrieved from "https://marvel.fandom.com/wiki/Marvel%27s_Agents_of_S.H.I.E.L.D._Season_6_4?oldid=6498227"
Community content is available under CC-BY-SA unless otherwise noted.