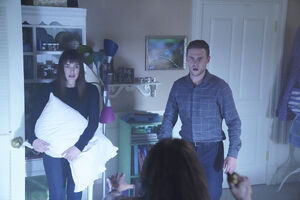 FitzSimmons wake up in a stark, white room, and after a brief reunion are confronted by Atarah. The Chronicom charges them with figuring out a way for her people to travel back in time and save their planet from its destruction. They will have at their disposal advanced Chronicom technology that grants them access to and share all of their memories, but they will be stuck inside this prison until they can develop a method of time travel. Once Atarah leaves, Fitz proposes to Simmons like his future self had done before. They catch up on their adventures since they last left - Fitz escaping the destruction of his ship with Enoch, and Simmons searching for them with Daisiy - but Simmons won't talk about anything that happened in the future because she doesn't know how to tell Fitz about his counterpart. Fitz presses her to open up until Simmons is transformed into a 7-year-old girl and hides under a lab table. Fitz follows her under there, but finds Simmons has crawled through a tunnel that leads to her childhood bedroom. Fitz realizes their minds aren't just the key to the prison, but are the prison. In the real world, Enoch pushes back against Atarah for using the Cerebral Fusion Machine on humans.

Simmons says she went back to her room because it's where she learned the math and science that turned her into the scientist she is today, and could lock up her troubles in her music box. She makes Fitz read her a bedtime story based on her own efforts to find him which turns out to be the Darkhold. Fitz drags the still-childlike Simmons back to the main area of the prison so they can get back to work, but she's still too immature to properly help him. Simmons returns to her adult self when Fitz suggests he could use the Chronicom technology to bring back an LMD or Aida to help him. Simmons' memories conjure up Mack and a doorway to the Lighthouse. Simmons begs Fitz not to follow Mack so she can explain to him what he would see. Fitz goes anyway, and witnesses Simmons' memories of his counterpart's body being brought back to the Lighthouse. He also learns Simmons was married to him, and Coulson has also passed away. Fitz can hardly deal with all of this, and retreats into his memory of the night at S.H.I.E.L.D. Academy when he became comfortable around Simmons. Due to all the pressure his mind is under, Simmons is worried Fitz will bring out the Doctor, his villainous alter ego created in the Framework. They can hear his soldiers marching towards them.

FitzSimmons are soon found by the Doctor and Hydra. They hide in Simmons' childhood room, but Simmons' worries overload her music box until it falls to the ground. The box opens up, and a monstrous version of Simmons - representing all the problems she ever symbolically locked away in it - emerges. FitzSimmons hides from the monster in her closet, who chases after them with a knife. As the monster breaks through the door, they fall through the back of the closet into the bunker underneath the Lighthouse. They then relive their memory of when Coulson recruited them onto his team, which Fitz says is where every nightmare they've endured could be traced back to.

The monster Jemma interrupts the memory and tackles Fitz onto the Zephyr. Simmons, meanwhile, is captured by Hydra when the Doctor pretends to be the real Fitz crying out for her help. Hydra threatens to use the memory machine from the T.A.H.I.T.I. Project to extract all of her memories and leave her as a hollow shell. The monster hangs Fitz upside-down and begins to "dissect" him, first by pulling out his heart. They summon memories of their friends to rescue them: Mack saves Fitz from the monster Jemma, while Daisy fights Hydra. They each make a run for it while their friends deal with their shadow selves, and they both end up in the containment unit. While the monster and the Doctor circle the pod, waiting for them to come out, inside the pod FitzSimmons continue hashing out their problems. The containment unit starts to flood when Simmons mentions how he saved her from the bottom of the Atlantic. As the water fills the pod, they both loudly proclaim their love for each other - ultimately the source of their hang-ups about each other - and the water stops. They leave the pod together, and to their surprise find their shadow selves enthusiastically making out.

FitzSimmons suddenly find themselves back in the prison's main area. Simmons gives Fitz his counterpart's ring. Atarah appears to get them to start working on developing time travel, but they would both rather stay there for an eternity. As Atarah threatens to separate them, she suddenly emits a loud, piercing noise and collapses. FitzSimmons are taken back to the real world, where Enoch has single-handedly taken out Atarah, Malachi, and the other Chronicom hunters. Before they teleport to somewhere else, Simmons suddenly tells Fitz he's a grandfather.

Back on Earth, Daisy has told Mack they had to leave FitzSimmons and Enoch behind. Mack tells her whoever devastated the Chronicoms' home planet are on Earth, albeit with Daisy impatiently interrupting Mack's moment.

Retrieved from "https://marvel.fandom.com/wiki/Marvel%27s_Agents_of_S.H.I.E.L.D._Season_6_6?oldid=5037838"
Community content is available under CC-BY-SA unless otherwise noted.