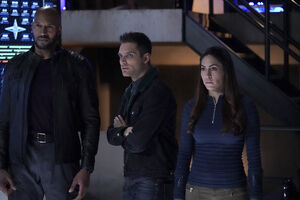 The Chronicoms' transportation disc takes Fitz, Simmons and Enoch to the last planet it most recently visited - Kitson. When a random alien accidentally uses the disc on himself, the team is left to play the casino's games until they can find a way off the planet. It isn't long before Mr. Kitson's people realize who they are and - since they are still fugitives on this planet - take them to their boss. Mr. Kitson sentences Enoch to work in the brothels, while FitzSimmons are to play a deadly game. Fitz, Simmons, and a third alien are put in a guillotine with a chain connected to the blade. The three of them hold up the blade with the chain while gamblers bet on the outcome. A mysterious woman pulls a knife on Mr. Kitson and tells him she wants FitzSimmons for herself. Kitson rigs the game to force the third contestant to drop his blade, ending the game. The woman introduces herself to FitzSimmons and Enoch as Izel, and she wants their help in finding something that was taken from her. FitzSimmons say they don't know much about alien worlds, but Izel says their expertise with Earth is what has her interested.

On Earth, May brings Sarge's truck to the Lighthouse with Sarge and Snowflake in tow. Mack tries to question Sarge about what he's really doing on Earth and why he looks like Coulson, but Sarge only responds with promises that it won't be long before Mack's people are answering to him instead. Jaco, who has been in S.H.I.E.L.D.'s custody since Sarge's team went after Deke, refuses to talk, and his health is rapidly deteriorating. Jaco does eventually open up to Yo-Yo about his homeworld, his family of bakers, and how the Shrike took all that away from him. May and Yo-Yo take a team to Iowa to apprehend two Shrikes after Deke cracks Sarge's method for tracking them. While they're gone, Jaco attacks Agent Khan when he enters his cell to check on him. Even though Jaco appeared to no longer be breathing, Jaco suddenly stood up and started breathing fire at him. Realizing Sarge's plan is for him to literally burn through his and his team's cell doors, Mack has Daisy stop Jaco with a quake.

On their way back to the Lighthouse with the Shrike, the two alien parasites begin to crystallize their host bodies from inside the containment unit. Yo-Yo and other agents try to stop the crystals' expansion with their I.C.E.R.s, but are forced to retreat when one of the agents is impaled on a crystal. In a moment of desperation, Mack turns to Sarge for advice. Sarge tells him not to jettison the unit because the crystals feed on life and will create a catastrophe on the ground, but then holds back on giving Mack any more advice until the director gives him back his team and his truck. Mack concedes to him right before the crystals burst through the containment unit. Sarge tells the Zephyr to gain altitude because the Shrike can't withstand the cold. May opens the ramp once she's high enough, and the crystals freeze and shatter before they can kill another agent. With this crisis averted, the S.H.I.E.L.D. team starts to look to Sarge for leadership. Sarge rubs his victory in Mack's face by simply telling him "Toldja."

Back on Kitson, Izel coerces the two aliens who swindled Fitz and Enoch out of their ship before into setting a course for Earth. While they prepare the ship to leave, Fitz notices Enoch is walking away. Enoch tells FitzSimmons that his mission with them is over, and now he has to find a new home for the Chronicoms. After they say their goodbyes, Enoch hands them a device they can use to contact him.

Retrieved from "https://marvel.fandom.com/wiki/Marvel%27s_Agents_of_S.H.I.E.L.D._Season_6_7?oldid=5598838"
Community content is available under CC-BY-SA unless otherwise noted.