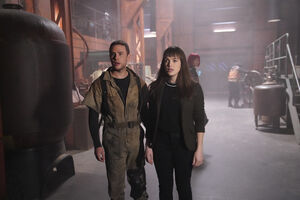 A galaxy-hopping hate beast that eats planets, and you want to defeat her with a, um, sword?

Appearing in "Collision Course (Part I)"

Synopsis for "Collision Course (Part I)"

FitzSimmons and Izel's ship successfully jump from space near Kitson to Earth. On Earth, Sarge plans to rendezvous with the Shrikes' creator when she arrives on Earth in the western half of the continental United States. Mack lets Sarge take his truck and one team member of his choice with him, while May and Daisy tag along and S.H.I.E.L.D. keeps an eye on them from the sky. When a device that repels the Shrike breaks, Mack coerces Deke into going with them, too, to fix the device instead of letting Sarge take Pax. Mack, Yo-Yo, Davis and a team of S.H.I.E.L.D. agents follows the truck from the Zephyr, with Pax and Jaco held as their prisoners in the plane's cargo bay. During the drive, Snow becomes infatuated with Deke, and Sarge opens up to Daisy that the Shrikes' creator is a woman named Izel.

Izel slowly infects her ship's crew with the Shrike. She reveals to FitzSimmons that she is headed to Earth to find three items stolen from her planet long ago designed to bring people together across space and time known as the "Di'Allas," which FitzSimmons recognize as the three Monoliths. Izel says she looked for them on the Chronicoms' homeworld, but her crew was murdered and the planet was destroyed by a man out to get her because she knows who he really is. Meanwhile, Sarge tells May and Daisy that is a demon that moves from one world to the next, motivated purely by hatred for all living things, and destroying the planet in her wake. The Chronicoms' homeworld was the closest his team came to stopping her, but she somehow got away from them and the planet's destruction had already begun before they arrived. He also says Izel took his family from her, and he will stop her by personally driving a sword through her. Dr. Benson sends Mack information he's found about a figure from Incan mythology named "Izel" who came from another world to find three Di'Allas that will restore her power.

Several Shrike-infected people gather in the middle of a field - Sarge's rendezvous point with Izel. Crystals emerge from their bodies and start to create a tower. Sarge sees the tower being constructed in the distance, and explains draws its power from the Earth until it shatters into a swarm of Shrike that devour the planet. Pax gets increasingly nervous about the Zephyr following Sarge's truck. He tricks the S.H.I.E.L.D. agent watching him into letting his guard down so he can kill him and set Jaco free. Yo-Yo, however, soon ties up Pax with a chain and puts Jaco back in the containment unit. Pax, still visibly terrified, reveals Sarge's plan is to detonate a powerful bomb at the base of the tower as Izel approaches, destroying her, the last of the Shrike, and taking a sizable portion of the Earth with it while Sarge escapes back to the safety of the Lighthouse. The Zephyr is directly in the bomb's blast area. Daisy and May tie-up Snow and try to stop Sarge after Mack warns them about his plan, but Sarge locks himself inside the cabin of the truck, volunteering to leave Snowflake behind rather than try to save her. With the truck on autopilot and the bomb set to explode when it crashes into the base of the tower, Sarge uses his portal device to teleport onto the Zephyr - the other end of the portal being through Jaco's jacket, which he left outside the containment unit.

Meanwhile, on Kitson, Enoch messages another Chronicom stationed on another world about gathering the remnants of their civilization so they can start anew. On the Chronicom ship, Malachi plans to use the Cerebral Fusion Machine to access FitzSimmons' brains.

Like this? Let us know!
Retrieved from "https://marvel.fandom.com/wiki/Marvel%27s_Agents_of_S.H.I.E.L.D._Season_6_8?oldid=6498231"
Community content is available under CC-BY-SA unless otherwise noted.