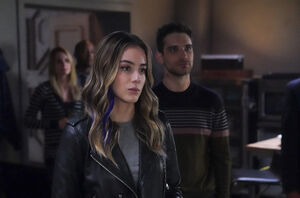 Deke tries to disarm Sarge's atomic bomb before it detonates when the truck crashes into the tower. He eventually realizes he doesn't know what to do with this bomb, and the team prepares for the end. At the last second, Daisy has an idea to create a bubble around the bomb with her powers, keeping it stable when the truck hits the tower's base so it doesn't explode. But they aren't out of it yet - the bomb is still active, and the tower shatters into a swarm of Shrike. Meanwhile, Sarge and his team take over the Zephyr. While Sarge and Jaco hold Mack, Davis and Diaz hostage on the plane's bridge, Yo-Yo ambushes and easily overpowers Pax. She throws Pax into the invisible barrier Sarge put up to prevent her from running onto the bridge. Jaco briefly takes down the barrier to get Pax, giving Yo-Yo an opening to unlock the handcuffs on Mack. Sarge kills Pax before Jaco can bring him onto the bridge, and closes the barrier with Jaco on the other side and orders him to find Yo-Yo.

FitzSimmons become concerned about their own safety when Izel freely admits to what she did to the rest of the ship's crew. She can sense when her tower is destroyed, and immediately suspects FitzSimmons of betraying her. They manage to contact S.H.I.E.L.D. with a distress code, only for Davis to respond with the same distress signal. Sarge takes over the communication so he can speak to Izel directly. Simmons recognizes his voice as Coulson's. In a heated exchange, Sarge promises to get revenge for his family and for the memories of them she took away, while Izel says he never had any memories to begin with. After she ends the communication, Izel picks up on how FitzSimmons recognized Sarge's voice, and thinks this is proof enough that they are working with him. FitzSimmons hide on the ship while the ship's Shrike-possessed crew search for them.

Daisy, May, Deke, and Snow try in vain to fortify the truck so the countless Shrike outside can't get in. Realizing it's only a matter of time before they break through anyway, Daisy opens the truck's back door so she can quake them one-by-one. On the Zephyr, Mack surprises Sarge by getting out of his handcuffs and attacking him. Jaco turns his back on Sarge and helps S.H.I.E.L.D. take back the plane. While Sarge is held in the containment pod, the Zephyr enters the upper atmosphere so Mack, Yo-Yo, Jaco and Davis can board Izel's ship. Yo-Yo and Mack save FitzSimmons right as the Shrike find them. Jaco and Davis find Izel, but she mysteriously disappears before they can stop her. When the crew blocks their way back to the quinjet, Jaco uses the portal on the back of his jacket to get everyone to safety on top of Sarge's truck. While the two teams get caught up, Jaco grabs the bomb and goes back through the portal. Jaco sacrifices himself when he detonates the bomb to destroy the ship, the crew, and (presumably) the last of the Shrike.

S.H.I.E.L.D. returns to the Lighthouse to celebrate another successful mission and FitzSimmons' return. May and Yo-Yo toast Jaco's sacrifice. Davis falls asleep while Piper is talking to him. Deke tries to impress his grandfather with his tech company and newfound wealth, and tries to continue having a relationship with Snowflake once she's put in lock-up. Mack, at Daisy's request, rekindles his relationship with Yo-Yo. May, on her own, goes to Sarge's cell and shoots him multiple times before finishing him off with a shot to the head.

There's no time for the team to play catch-up, they have a planet to save.

Retrieved from "https://marvel.fandom.com/wiki/Marvel%27s_Agents_of_S.H.I.E.L.D._Season_6_9?oldid=5598843"
Community content is available under CC-BY-SA unless otherwise noted.