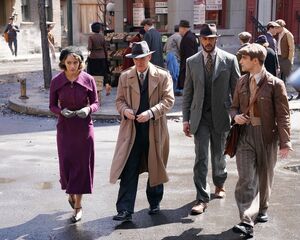 Appearing in "The New Deal"

Synopsis for "The New Deal"

The Agents of S.H.I.E.L.D. find themselves transported to 1931 New York City on the trail of Chronicom hunters going back in time to stop S.H.I.E.L.D. in its infancy. None of them, however, know why they've gone so far back in the past when S.H.I.E.L.D. itself would not be created until the 1950s. Simmons activates the new, Chronicom-enhanced LMD of Phil Coulson, but his brain - based on records from his time in the Framework - is quickly overwhelmed by the past two years' worth of memories that come rushing to him. No one, not even Simmons, knows where Fitz is, fearing Elsewhere in the city, a team of Chronicom hunters ambush a trio of police officers and take their faces. Mack, Daisy, Deke and the Coulson LMD leave the Zephyr to investigate when Enoch discovers this crime; while Simmons and Enoch stay behind to look after the still-comatose Agent May, and Yo-Yo is quarantined until they can figure out what effects the Shrike had on her body.

The team gain access to the crime scene by posing as Royal Canadian Mounted Police. The find the body of a bootlegger with the faceless cops, and his bottles of whiskey with a swordfish logo on them. Coulson knows of an old S.H.I.E.L.D. safe house in a speakeasy that used "swordfish" as its password. While Coulson and Mack follow this lead, Daisy looks after Deke while he tries to reconstruct the cops' faces with one of his gadgets. The Chronicoms, still posing as police officers, return to the scene of the crime, and the lead hunter recognizes Quake. The other two hunters unsuccessfully try to kill Daisy and Deke, and they are able to capture one of them and bring him back to the Zephyr while he's still out of commission. Back on the plane, Yo-Yo is given a clean bill of health, and reluctantly accepts new, more realistic prosthetic arms from Simmons.

Coulson and Mack successfully get into the speakeasy, but they quickly run afoul of the gang who runs it. Coulson, emboldened by his new, mechanical body, shrugs off their bullets and takes a shotgun from one of them. After holding off the gangsters, they are confronted by the speakeasy's boss Ernest Hazard Koenig, an ancestor of the Koenigs who are S.H.I.E.L.D. agents in the present day. The boss, thinking another gang is trying to move in on his territory, tells Mack and Coulson he was supposed to be working a party that night for then-Governor Franklin Delano Roosevelt.

Mack, Coulson, Daisy and Deke work the party with one of Koenig's employees, Freddy, to stop the Chronicoms from killing Roosevelt, thereby preventing him from making the SSR that would become S.H.I.E.L.D.. They figure the Chronicoms went back to 1931 because it would be easier to kill him before he became the President of the United States. Mack and Coulson are both starstruck seeing Roosevelt in person. The team realizes the Chronicoms are waiting for FDR to be less out in the open to assassinate him, so Coulson and Daisy hurry after him when he's taken to a service entrance to leave the party. This turns out to be a false alarm, however, and Coulson ends up helping Governor Roosevelt into his wheelchair.

Meanwhile, Freddy meets with a mysterious woman who knew his late father. She takes him to a back room, and gives him a vial containing an unknown substance. She promises Freddy that his family's glory will be restored if he transports it to the docks. Back on the Zephyr, Simmons overloads the captured Chronicom's memory until he reveals the target isn't FDR - but Freddy. The Chronicom hunters ambush Freddy and his contact. She is shot in the stomach, but Daisy stops them from killing Freddy. Mack and Deke get Freddy to safety while Daisy and Coulson fight the Chronicoms. With Coulson's new body, the two of them easily take care of the hunters, but they have to escape when the police officers providing security at the party think some of their own are under attack. They take the woman - still alive but badly wounded - back to the speakeasy, where Koenig reveals Freddy is Wilfred Malick, the father of Gideon Malick. Coulson and Daisy realize the Chronicoms are trying to take out Hydra before it could ever take hold, preventing S.H.I.E.L.D. from being created in the first place. To save S.H.I.E.L.D., they'll have to save Hydra.

On the Zephyr, Enoch discovers Agent May is no longer in her bed.

Retrieved from "https://marvel.fandom.com/wiki/Marvel%27s_Agents_of_S.H.I.E.L.D._Season_7_1?oldid=5691623"
Community content is available under CC-BY-SA unless otherwise noted.