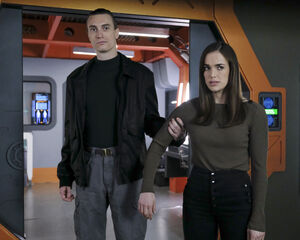 Clever -- digging up our greatest hits.

Nathaniel Malick finds John Garrett - then a fresh recruit in S.H.I.E.L.D. - at Koenig's bar, and recruits him into his anarchist group. He takes Garrett back to Afterlife, where Sibyl shows him his original future. Li's Inhuman powers are transferred to Durant, another of Malick's henchmen, and Kora appears to put Li out of his misery afterwards. Malick promises Garrett that he will soon get powers of his own - when they get there.

The S.H.I.E.L.D. team moves into the Lighthouse. With Roxy and The Deke Squad accepted into S.H.I.E.L.D. Academy, leaving them alone in the facility when Gordon and Jiaying teleport inside. While they discuss their plans to rescue the captured Inhumans from Malick, Jiaying brings up that her daughter Kora is still aligned with the anarchists. This comes as a complete shock to Daisy, as May and Yo-Yo had neglected to tell her about her mother's first daughter. Daisy starts to piece things together - that Kora was supposed to have gone through with her suicide, prompting Jiaying to leave Afterlife and meet her father - but the plan is ready to move ahead. Gordon will get Coulson inside Afterlife to find where Malick is keeping his prisoners while Mack and Yo-Yo wait for them on the quinjet. Jiaying will stay at the Lighthouse with the rest of the team to keep her safe from Malick.

Gordon and Coulson get inside Afterlife, but are quickly intercepted by Malick and his goons. Coulson is reunited with Garrett (even though they've technically never met) before Gordon's powers are transferred to him. While Garrett revels in his new teleportation powers, Malick has him teleport both of them to the Lighthouse. Coulson and Gordon are placed in Afterlife's dungeon, so Gordon uses the last of his energy to get Coulson to freedom. Mack and Yo-Yo, worried that they were gone for so long, also break into afterlife, and together the three agents of S.H.I.E.L.D. take down most of Malick's goons. Yo-Yo even turns Durant's stolen Inhuman powers against him and stabs him in the knee with his own conjured knife. Coulson finds Kora waiting for them, but he incapacitates her with an ICER before she can attack.

Meanwhile, Sousa pushes Daisy into finally talking to her mom. Daisy tries to tell her about how they knew each other in the future and how she grew up without her mother, but never tells Jiaying that she is her mother. May finds Garrett looking around Simmons' lab, but after a short fight he teleports away from her. May warns Daisy and Jiaying about the intruders, but Malick finds them before they can get to safety. Malick starts to tell Jiaying the truth about her relationship with Daisy and how things went so wrong between them in the future, and Daisy stops him with a quake just as he gets to the part where Daisy's father killed her. Malick responds with his own, more focused quake, something he honed over the years since he stole Daisy's powers. Jiaying tries to save her daughter by draining the life from Malick, only for Malick to kill her by breaking her neck with a quake. Daisy is about to unleash the full extent of her powers on Malick when he's forced to run as May shoots at him from behind.

Garrett grabs Simmons, and teleports them both away before Sousa can stop him. Malick and Garrett hijack the Zephyr with Simmons as their prisoner. Unknown to them, Deke is still on the plane working on the time drive. While they fly away, Malick demands Simmons take them to Fitz.

Like this? Let us know!
Retrieved from "https://marvel.fandom.com/wiki/Marvel%27s_Agents_of_S.H.I.E.L.D._Season_7_10?oldid=6498234"
Community content is available under CC-BY-SA unless otherwise noted.