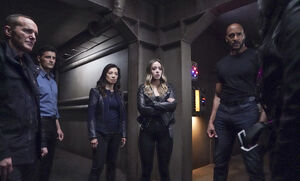 The team loses track of the Zephyr as Malick has it taken into outer space. Coulson, Mack and Yo-Yo bring their prisoners from Afterlife back to the Lighthouse. Daisy immediately confronts Kora, only for the wayward Inhuman to taunt everyone with the new timeline she is creating with Malick and Sibyl. Kora then surprises everyone by saying she wants to become an agent of S.H.I.E.L.D., so Daisy talks to her alone. According to Kora, Sibyl predicted Daisy would not abandon her sister to fight alone. Daisy follows Sibyl's prediction not by staying with Kora, but by taking the quinjet with Mack and Sousa to save Simmons.

On the Zephyr, Malick is unable to find Fitz in any of Simmons' memories. Garrett catches Deke sneaking around the plane, and brings him to Malick. They try to force Deke to tell them how Simmons is blocking her memories of Fitz, but Malick notices the implant in her neck before he says anything. He puts Simmons back into the memory machine and goes inside her memories with her. Malick sees Simmons building the implant and the time drive with Fitz and Enoch, when Fitz - who seems to have recently undergone a blood test - suggests they now have the time to live together before they help their friends. Malick then goes ahead to Simmons' last memory which Fitz, which to his dismay is also in the memory machine. Fitz and Simmons appear to be arguing over the implant making her forget more than Fitz's location, and that she's losing part of herself by doing this. Malick gets out of the machine, unsatisfied with what he saw. When Simmons wakes up, she does not seem to have any memory of Fitz at all.

Meanwhile, Kora takes out the Lighthouse's power with a single burst of energy, allowing Sibyl to enter the facility through the power grid. Sibyl releases the prisoners, but Yo-Yo stops one of Malick's goons before he can slit her throat. Kora kills the goon to prove that she can help S.H.I.E.L.D., and then tempts them by promising she could reunite them with the people they've lost and kill those like Grant Ward who took them away. May shows Kora Jiaying's corpse so she can see that Malick and the Chronicoms are only using her. Kora unsuccessfully tries to bring her mother back to life by giving her some of her energy, and then accuses May of just trying to manipulate her emotions like she claims Malick is. After a short fight, Garrett teleports into the Lighthouse and brings Kora to the Zephyr.

Coulson discovers Sibyl accessed the location of various S.H.I.E.L.D. facilities before she left the Lighthouse. Malick didn't go into space to hide from S.H.I.E.L.D., but to call in reinforcements. Numerous warships from Chronyca-2 appear over Earth, and begin to wipe out S.H.I.E.L.D. one base at a time.

Like this? Let us know!
Retrieved from "https://marvel.fandom.com/wiki/Marvel%27s_Agents_of_S.H.I.E.L.D._Season_7_11?oldid=6498235"
Community content is available under CC-BY-SA unless otherwise noted.