"The End is at Hand" 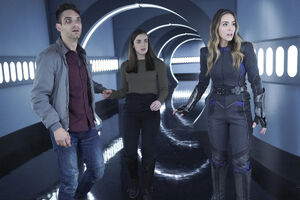 Appearing in "The End is at Hand"

Synopsis for "The End is at Hand"

The quinjet docks on the Zephyr, but the plane is soon brought onto one of the Chronicom warships. Daisy, Mack and Sousa find the Zephyr empty; Malick and his goons have already brought Simmons and Deke with them to see Sibyl on the ship. The Chronicoms give Simmons an injection that will dissolve her implant so they can find where Fitz has been hiding. Simmons, however, has had no memory of Fitz whatsoever since Malick went inside her head looking for him. Daisy goes onto the Chronicom ship to find Deke and Simmons, but Sibyl - who has since built herself a new body - warns the agents of S.H.I.E.L.D. that they have no chance at stopping them now, and secretly confines in Malick that they have a better chance at finding Fitz if they let Daisy find her friends. Malick, however, wants Kora to stop her anyway.

Daisy rescues Simmons and Deke, even though Simmons doesn't seem to have any memory of her, either. Kora stops them before they can get back to the plane, but Daisy distracts her long enough for Deke and Simmons to get away without her. Rather than fight her sister, Daisy uses her powers to stop Kora's attacks, and talks to her about her relationship with their mother. Kora is convinced Daisy isn't bad like Malick says she is, and lets her get away. When Malick discovers this, he has Kora incapacitated. Meanwhile, a group of Chronicom hunters attack the Zephyr to steal Mack and Sousa's faces. When Mack easily takes them all down with one gadget, Sousa - remembering what happened at Area 51 - suggests their remains could be turned into a bomb that could destroy the ship if Daisy doesn't return with Deke and Simmons. Mack instead turns them into missiles that could destroy the ship's hangar doors once Deke and Simmons get to the Zephyr. Once Daisy gets back to the plane, too, they blow the hangar doors and fly back to Earth.

On Earth, all of S.H.I.E.L.D.'s bases have been wiped out by the Chronicom bombardment save the Lighthouse, which was built to withstand such an attack. Coulson, May and Yo-Yo trap Garrett when he teleports into the base to plant bombs that will destroy by replicating a device Fitz designed to trap Gordon. Garrett, realizing he will be destroyed with the Lighthouse, agrees to help S.H.I.E.L.D., but fails to convince Malick to delay the explosion. While the agents of S.H.I.E.L.D. protect themselves from the explosion, Garrett is trapped under debris. Coulson chooses to save him rather than let him die. The Lighthouse suddenly receives a transmission from S.H.I.E.L.D. about the location of an 0-8-4. With no other way to reach it, Garrett - now willing to help S.H.I.E.L.D. after Malick betrayed him - takes them to its location: Koenig's bar.

The team is immediately surrounded by the few remaining S.H.I.E.L.D. agents who were all called to the bar. They are able to convince the other agents to stand down, but not before a young Victoria Hand shoots Garrett in the head when he reached for his gun. The other agents reveal they or their ancestors were all given these 0-8-4's by Enoch or the Koenigs over the past several decades. The team doesn't know what to do with all of it, but when the rest of the team arrives, Simmons instinctively know how to put it all together to build one device, the final piece being her wedding ring. The device opens a portal, and Fitz comes through it.

Like this? Let us know!
Retrieved from "https://marvel.fandom.com/wiki/Marvel%27s_Agents_of_S.H.I.E.L.D._Season_7_12?oldid=6498236"
Community content is available under CC-BY-SA unless otherwise noted.