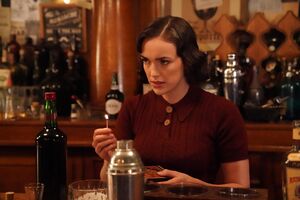 Enoch, this looks like the start of a marvelous friendship.

Appearing in "Know Your Onions"

Synopsis for "Know Your Onions"

Mack and Deke get Freddy - unaware of his connections to Hydra - away from the police, but they insist they stay with him until they can be sure he's safe from the Chronicoms. As the three men hitch a ride on a train to the rendezvous point, Mack and Deke try to figure out why the Chronicoms are really interested in him. Meanwhile, Simmons and Yo-Yo get to Ernest Koenig's speakeasy so Simmons can tend to Freddy's Hydra contact. When the Chronicom Hunters arrive at the speakeasy still disguised as police officers, Koenig helps the S.H.I.E.L.D. and the Hydra operative hide until they leave. Simmons discovers Freddy is transporting a crucial element in Abraham Erskine's Super Soldier Serum after she finds a drop of the substance on the contact's shoe. Even though the contact refuses to tell them where Freddy is going, Koenig figures out he's going to a place called Hell's Harbor. Back on the Zephyr, Enoch struggles to contain Agent May, clearly displaying more aggressive, impatient behavior since she awoke. May insists she head off to find Mack and Deke on her own when the team is unable to contact them. Enoch fights May to keep her on the plane, but they are interrupted when the rest of the team returns to the plane with Koenig. May is unfazed to see Coulson again, even if he isn't the original Coulson or Sarge, and she lets Simmons sedate her again without resisting.

Freddy gets suspicious of Mack and Deke when he finds them rifling through the booze he's supposedly transporting. Freddy pulls a gun on them, but they're able to get the gun away from him when the train stops at Hell's Harbor. While on their way to meet up with Mack and Deke, Simmons discovers they only have 17 minutes before the Zephyr leaps through time again, with or without them. Daisy gets in contact with Deke, while Mack discovers the vial in one of Freddy's bottles. Daisy tells Deke about Freddy's connections to Hydra, and to kill him when she finds out Deke has his gun. Mack convinces Deke not to kill him, but they're then suddenly ambushed by the Chronicom Hunters. Freddy gets away from them in the confusion. Daisy, Coulson, Enoch and Koenig arrive on the scene to help them fight. When Mack realizes Freddy is missing, he sends Enoch and Koenig to find him. Freddy shoots Koenig in the arm and leaves with Hydra when he tries to stop him. Realizing their mission has failed, the Chronicom Hunters retreat. The team hurries back to the Zephyr with only minutes to spare before the time window closes, but Enoch is unable to make it back before the plane disappears to another time period. Koenig takes Enoch back to his speakeasy, where Koenig shows an interest in S.H.I.E.L.D. and robots, the beginning his family's history with S.H.I.E.L.D.

Like this? Let us know!
Retrieved from "https://marvel.fandom.com/wiki/Marvel%27s_Agents_of_S.H.I.E.L.D._Season_7_2?oldid=6888898"
Community content is available under CC-BY-SA unless otherwise noted.