"Alien Commies from the Future!" 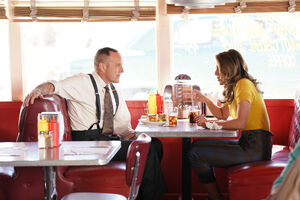 Appearing in "Alien Commies from the Future!"

Synopsis for "Alien Commies from the Future!"

The team, sans Enoch, follow the Chronicom Hunters to another time period. They find themselves in 1955 near Area 51, one of the earliest S.H.I.E.L.D. bases. The team suspect the Chronicoms' plan involves Project Helius, an early attempt to build an ion fusion generator that they think would allow the Chronicoms to destroy the Zephyr, preventing S.H.I.E.L.D. from following them to another time period. They abduct Gerald Sharpe, and employee for the Department of Defense scheduled to arrive at Area 51 to witness a test of Project Helius, so Coulson can pose as him and gain access to the facility. Simmons poses as Agent Peggy Carter to get inside with him. The rest of the team stays behind on the plane to interrogate Sharpe for information about Helius, but Sharpe's racist inclinations make him more hostile to Mack, Yo-Yo and May's line of questioning than they were expecting.

Inside Area 51, Simmons and Coulson try to find out which of the people working there are Chronicoms in disguise by performing a review of the base's staff. Before they can find the Chronicoms, however, Daniel Sousa - Peggy Carter's partner - arrives at the base ahead of the test. He quickly sees through Simmons' ruse, and has both her and Coulson taken into custody. Daisy goes in posing as a CIA agent to convince Sousa to let them go. Deke, meanwhile, is able to get enough information out of Sharpe to know that S.H.I.E.L.D. can't properly power up Project Helius before Sharpe starts ranting about communists. Instead of using it as a weapon against the Zephyr, Deke realizes the Chronicoms want to sacrifice one of their own to power Helius and turn it into a bomb that would wipe all of S.H.I.E.L.D.'s most important scientists.

May and Yo-Yo go into Area 51 to (literally) smoke the Chronicom infiltrator out with a gas grenade. The Chronicom, however, manages to get away from them when May has a panic attack in the commotion and Yo-Yo is yet again unable to use her Inhuman speed. Daisy, Coulson and Simmons throw Sousa into his own holding cell before he can respond to the sirens set off by the gas grenade. May and Yo-Yo follow the Chronicom to Helius's base to keep her from connecting herself to it long enough for Daisy, Coulson and Simmons to activate an experimental EMP discharger that would stop her for good. Before they can activate it, they are ambushed by yet another Chronicom infiltrator. While Coulson fights the second Chronicom in the facility, Sousa escapes from the holding cell and ends up fighting the Chronicom as well. Simmons activates the EMP discharger, shutting down both Chronicoms and Coulson. Sousa, Simmons and Yo-Yo watch on as the Chronicoms they were just fighting disintegrate.

Meanwhile, Mack and Deke leave Sharpe in the middle of the desert and make him think he had been abducted by aliens. Sharpe wanders to a nearby diner, where nobody believes his story about alien communists from the future.

Retrieved from "https://marvel.fandom.com/wiki/Marvel%27s_Agents_of_S.H.I.E.L.D._Season_7_3?oldid=5798291"
Community content is available under CC-BY-SA unless otherwise noted.