"Out of the Past" 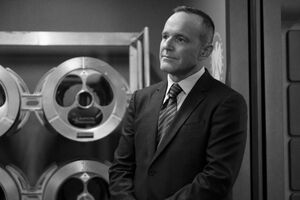 Fate. I don't believe in it. But I know history. I know how the story goes. And when it's playing out right in front of you, it feels like you can't escape. That fate's gonna catch up to you, tap you on the shoulder, whisper in your ear that your time's up. And then your story ends. Sometimes the hero has to die, and there's nothing you can do about it.

Appearing in "Out of the Past"

Synopsis for "Out of the Past"

Damage done to Coulson's internal systems during his fight with the Chronicoms have him seeing the whole world in black and white, and with an internal monologue. He recognizes the day - July 22, 1955 - as the day Daniel Sousa became the first S.H.I.E.L.D. agent to fall in the line of duty, supposedly killed by Russian agents in Los Angeles after delivering a device to Howard Stark. Convinced he should try to save Sousa's life, Coulson convinces the suspicious Agent Sousa that he has been sent to help him deliver the asset. Coulson is unable to contact the Zephyr directly, so he first calls Enoch (still working at Koenig's bar in New York) so he can patch him through to the plane and tell his team his plan. Yo-Yo and Deke go to the house of the S.H.I.E.L.D. scientist whose face was stolen by the Chronicoms to retrieve the device, but Deke is ambushed and abducted by the men who would later kill Sousa. Yo-Yo alone brings the device back to the Zephyr, while Coulson is given a duplicate briefcase.

Coulson and Sousa take a train to Los Angeles. While Sousa gets a drink, Coulson is approached by Luke, the Chronicom Hunter who the team fought in 1931. When Coulson turns down his offer to let the Chronicoms have the Earth peacefully, Luke hints that he contacted the people after Sousa to let them know where he would be. Daisy, Mack and Coulson help Sousa fight off his assassins. They bring him to the Zephyr while trying to keep him in the dark about who they really are. May strangely gets disoriented when she meets Agent Sousa. Sousa confesses to the team that he thinks Hydra, not the Russians, are after the device, an idea the agents of S.H.I.E.L.D. readily accept. Meanwhile, the men who abducted Deke bring him to the man behind the plot to kill Sousa - Wilfred Malick. After killing one of his goons who kidnapped the wrong man, Malick chooses to let Deke live out of gratitude for the role he played in helping him get to the top.

Simmons and Yo-Yo discover the source of Agent May's bizarre behavior comes from an ability she gained from her time in the other dimension to feel the emotions of everyone else around her. While Mack and Coulson debate whether they should let Sousa die, Sousa lets himself off the plane to deliver the package. The team intercepts him after he delivers the package but before he is killed, allowing Coulson to take his place when Hydra's assassins shoot him in the back. Although the world believes Agent Sousa has died, the real Daniel Sousa is on the Zephyr when it jumps through time again. Coulson finally lets him know who they are, and that they preserved the timeline while letting him live by taking him out of that timeline. An Alice Cooper song tells the team that they've arrived in the 1970s. Back in the 1950s, however, Luke forges an alliance with Wilfred Malick.

Like this? Let us know!
Retrieved from "https://marvel.fandom.com/wiki/Marvel%27s_Agents_of_S.H.I.E.L.D._Season_7_4?oldid=6498240"
Community content is available under CC-BY-SA unless otherwise noted.