"A Trout in the Milk" 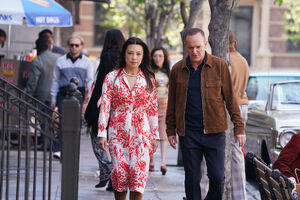 Come with me if you want to continue to exist.

Appearing in "A Trout in the Milk"

Synopsis for "A Trout in the Milk"

The team, with Agent Sousa in tow, is transported to New York in the year 1973. Coulson, May, Daisy and Sousa go to Koenig's old speakeasy to pick up Enoch, but no one there has seen him in a long time. Instead, they find General Rick Stoner - the head of S.H.I.E.L.D. who oversaw construction of the Lighthouse - hosting a party for the launch of Project Insight decades before it should happen. The team soon discovers Wilfred Malick and his son Nathaniel are still alive and involved with S.H.I.E.L.D., more evidence that the timeline has changed. Picking up one something Gideon Malick (here still a young man) said, Daisy and Sousa find a list of Project Insight's targets in Wilfred Malick's secret office in the bar's back room. With names like Bruce Banner on the list, the team realizes the Chronicoms must be feeding them information.

Wilfred Malick and the Chronicom Hunters stop Coulson and May before they can leave the bar. They demand their surrender, but Malick lets them get away when Daisy takes Nathaniel hostage. The Chronicom hunters follow them out of the bar, and Nathaniel Malick sees Daisy use her Inhuman powers to stop them. Enoch suddenly shows up in a car to help them get away. Meanwhile, Mack and Yo-Yo take a quinjet to the Lighthouse expecting to find it abandoned, only to discover S.H.I.E.L.D. converted it into the launching site for Project Insight. Without helicarriers, S.H.I.E.L.D. plans to use a series of satellites into space that will take out Hydra's enemies. Once everyone - including Enoch - is back on the Zephyr, the plane unexpectedly leaps through time again before they can stop Project Insight. Simmons confides in Enoch that she's worried she is "slipping" without him on the plane.

The agents of S.H.I.E.L.D. find themselves transported to July 4th, 1976, the day General Stoner announced the first of Project Insight's satellites would launch into space. Because they can't use the plane's weapons to shoot down the satellite without giving away their position, Mack plans for Coulson and May to infiltrate the Lighthouse and set off charges to flood the facility, setting of an evacuation protocol that will shut down the launch. Sousa volunteers to go with Daisy while she hacks into the Lighthouse's security systems to get Coulson and May inside and to see if there are any prisoners who might be left behind during the evacuation. Daisy, sensing Sousa struggling to cope with his situation outside of his own time, shows him a picture of himself she took on her phone to give him a taste of what the future has to offer. They're soon after ambushed and knocked unconscious by Nathaniel Malick, as the Chronicoms told him where they would be. May and Coulson run into General Stoner, but before Coulson can convince him to shut down the launch, May knocks him out and takes his access card so they can move around the base without Daisy's help

Meanwhile, Deke and Yo-Yo confront Wilfred Malick in his home overlooking the Lighthouse. Malick threatens them with the knowledge that the Chronicoms knew he would be there, and gave themselves leverage over S.H.I.E.L.D. to stop them. Deke shoots Malick, killing him, before he can reveal what that leverage is. Back on the plane, Mack sees his parents are prisoners on the Lighthouse, and will die if the base floods. Mack stops May and Coulson from detonating the charges and orders Enoch to shoot down the satellite when it launches. Although they've destroyed Project Insight, they've given away their position. Inside the Lighthouse, S.H.I.E.L.D. agents capture May and Coulson.

Like this? Let us know!
Retrieved from "https://marvel.fandom.com/wiki/Marvel%27s_Agents_of_S.H.I.E.L.D._Season_7_5?oldid=7039481"
Community content is available under CC-BY-SA unless otherwise noted.