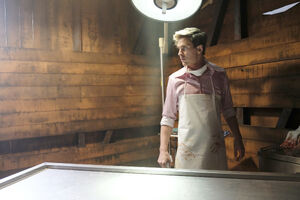 I haven't feared death in a long time. The thing is... dying, it's kind of my superpower.

Appearing in "Adapt or Die"

Synopsis for "Adapt or Die"

The Zephyr has destroyed the Project Insight satellite before it could complete its launch, but in the process revealed its location to the S.H.I.E.L.D. agents on the ground who are unknowingly the pawns of Hydra and the Chronicoms. Suddenly, the Lighthouse goes into lockdown and automatically targets the Zephyr; Coulson guesses the the Chronicoms had compromised the system. One missile damages the temporal shielding on the plane, which would rip the Zephyr to pieces the next time they jump through time. Stoner then starts to interrogate Coulson and May about their true reason for being in the Lighthouse. May comes into contact with one of Stoner's underlings during the questioning, and when she feels nothing from her the two of them realize the Chronicoms have begun replacing S.H.I.E.L.D. agents with their own. Coulson is skeptical due to the agent's expression of emotion that Chronicoms lack, before May starts to let her frustration repeatedly mourning him when he keeps coming back to life. They then conclude that the Chronicoms can successfully masquerade as humans by copying their memories. They escape from their holding room and save General Stoner moments before a Chronicom Hunter would have stolen his face. General Stoner, now fully believing their story about face-stealing, time-traveling alien/robots, offers to help them by evacuating the base before the Chronicoms can get to anyone else.

Coulson splits off from May and Stoner to explore an area somehow under the lowest level of the Lighthouse, and discovers the Chronicoms' ship buried beneath the facility. He interfaces with a device that brings him into contact with the Chronicoms' predictor, Sibyl, who can see the different strands of time that could have been, guiding them to the points in the past where they could make the biggest change. Sibyl explains that the Chronicoms don't value human life because of how short their lives are, but Coulson counters that by pointing out how life experiences make those lives worth something before reminding her of how many times he has died and come back. Coulson detonates the charges to destroy the Chronicom Hunters on the ship who that have not yet been deployed - and himself.

Meanwhile, Daisy and Sousa wake up and discover they are prisoners of Nathaniel Malick. After explaining his motives to them, Malick has his goons take Daisy away so he can surgically transfer her Inhuman powers to himself; he is also convinced that Sousa has slow aging powers. Sousa is helpless as he watches Malick tear apart her body. Daisy is in a dire condition and nearly unconscious when she is finally brought back to him, so Sousa tells her his war stories in a desperate attempt that she can stay focused enough on them to not slip away. He then finds a piece of bloodied glass lodged in her palm and realizes she still had some fight in her. When a guard comes to check on them, Sousa stabs him in the stomach before knocking him out. As he collects Daisy, Malick, unable to control Daisy's powers, accidentally tears down the barn where he's holding them.

Simmons, Deke and Enoch fix the Zephyr while Mack and Yo-Yo rescue Mack's parents from the Lighthouse. Deke finds Enoch seemingly experimenting on Simmons while she's unconscious, and takes him down with a defibrillator to rescue his "nana." Once conscious, however, Simmons reveals she has a device in her neck that inhibits her memories, protecting Fitz while he observes the Chronicoms' movements through time from an exposed location. Without Enoch to fix her memories, Simons and Deke have to figure out how to repair the time machine on their own.

In the Lighthouse, Mack awkwardly tries to keep his identity a secret from his parents as they make their escape. They're ambushed by Luke before they can escape, but they're saved by the timely arrival of May and General Stoner (the latter armed with a Chronicom weapon). May says her goodbyes to General Stoner, advising him to abandon the Lighthouse under the pretext of a Hydrogen Wave Crisis, before leaving with Yo-Yo, Mack, and his parents - aware that Coulson would not be coming back with them now but certain that he would some day. Mack's dad thanks May for helping rescue them while they fly back to the Zephyr, but when he touches her shoulder, May feels nothing from him like the agent from earlier. Realizing Mack's dad has been replaced with a Chronicom, May has Mack check a wound he received on his arm during their escape. With his cover blown, both of Mack's parents attack the agents of S.H.I.E.L.D. and reveal they killed his real parents a while ago. Yo-Yo breaks the father Chronicom's neck, while Mack is forced to toss the Chronicom with his mother's face from the quinjet.

Like this? Let us know!
Retrieved from "https://marvel.fandom.com/wiki/Marvel%27s_Agents_of_S.H.I.E.L.D._Season_7_6?oldid=6498242"
Community content is available under CC-BY-SA unless otherwise noted.