"The Totally Excellent Adventures of Mack and The D" 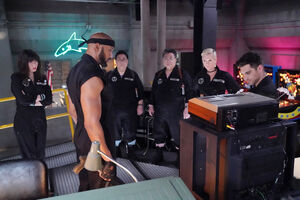 Episode Title
"The Totally Excellent Adventures of Mack and The D"

Appearing in "The Totally Excellent Adventures of Mack and The D"

Synopsis for "The Totally Excellent Adventures of Mack and The D"

Mack and Deke are stranded in 1982 when the Zephyr leaps through time again despite having only arrived there a few minutes earlier. Mack mostly shuts Deke out as he struggles to cope with his parents' deaths at the hands of the Chronicoms, and goes to Illinois to visit their graves and see from afar himself and his brother as children in his uncle's care. Deke finds Mack some time later living alone in a house spending his time watching TV and building model cars, but Mack still wants nothing to do with him. For nearly a year, Deke visits Mack regularly to drop off food while trying to reconnect but is completely ignored. Mack eventually leaves his house when Deke slips a note under his door telling him to meet him there for something urgent. To Mack's surprise, Deke has put together a band called "The Deke Squad" that became popular by blatantly stealing popular songs from the future.

After the show, Deke reveals his band is actually a cover for a makeshift spy agency, consisting of: covert ops and tactical specialist Roxy Glass, masters of disguise Ronnie and Tommy Chang ("The Chang Gang"), demolitions expert Olga Pachinko, and the drummer Cricket, who is just the drummer. They've set up their base of operations in the Lighthouse, with Coulson's hard drive - having survived the blast that destroyed his body and the Chronicoms - plugged into a television so he can communicate with the rest of the team. Deke tries to convince Mack to lead his team by showing him a training exercise (which goes poorly) and by presenting him with a new shotgun-axe. Mack, however, thinks Deke is just acting childish, and that the group of sycophants he's surrounded himself with are not a real replacement for the team.

Sibyl - who escaped the explosion through the power grid - tricks an electronics repairman into building new bodies for herself and her Chronicom Hunters. Although their new bodies are far from the advanced, humanoid models they were before, they still come with a variety of weapons including guns, buzzsaws, and lasers - that they then turn on the repairman. Sibyl and the Chronicoms break into the Lighthouse to recover the Time Stream, which is still buried in rubble in the lowest level of the facility. They quickly find and kill Cricket, and a woman Cricket brought with him to the Lighthouse is able to warn Deke, Olga and the Changs before a Chronicom catches up to her and brutally kills her as well. Olga tries to take on the Chronicom herself, but is easily overpowered by it. Meanwhile, Roxy confronts Mack about the fight she overheard him having with Deke, revealing that Deke has been looking after Mack's younger self and his brother (who she thinks are actually Mack's kids), when they're suddenly attacked by a Chronicom. Mack gets himself and Roxy to safety before they rescue Deke and the others from the Chronicom about to kill them. With a newfound commitment to the team, Mack helps Deke and the Deke Squad finish off the remaining Chronicoms. While the team celebrates their success, what remains of Sibyl's body gets away with the Time Stream. Some time later, Deke takes Mack to see himself, his brother, and his uncle so he can give them a gift of a toy car.

The Zephyr returns to Mack and Deke's time 20 months after they were left behind. Simmons sends May and Yo-Yo to find Mack, Deke and Coulson's hard drive at the Lighthouse. Mack introduces Yo-Yo to his new team, now fully-fledged agents of S.H.I.E.L.D., and May suggests Simmons has build Coulson a new body. Elsewhere, the Time Stream is delivered to Nathaniel Malick, who has been working with Sibyl all along.

Retrieved from "https://marvel.fandom.com/wiki/Marvel%27s_Agents_of_S.H.I.E.L.D._Season_7_7?oldid=5659081"
Community content is available under CC-BY-SA unless otherwise noted.