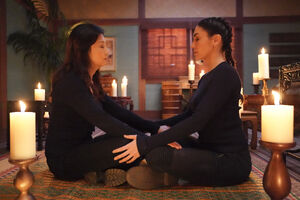 Episode Title
"After, Before"

Writers
James C. Oliver, Sharla Oliver
Previous Episode
Next Episode
"The Totally Excellent Adventures of Mack and The D"
(July 8, 2020)
"As I Have Always Been"
(July 22, 2020)

Appearing in "After, Before"

Synopsis for "After, Before"

After Mack and Deke were left behind in 1982, the Zephyr continued to sporadically leap forward in time, going from January 1982 to October 1983 in what what was inside the ship only a matter of hours. Simmons theorized that the time drive was experiencing power surges since the Zephyr stayed in the same place with each leap. At the rate they are going, the plane would collapse into a space-time singularity in two days, or twenty minutes from the perspective of the ship. In order to fix the drive, they would have to get through a field pulsating around it that disintegrates anything it touches. Yo-Yo should be able to move fast enough to get through the pulses, but her Inhuman powers are still not working. Daisy suggests their best shot at restoring Yo-Yo's powers lies with her mother Jiaying, who is still living at Afterlife at this point in history.

Yo-Yo and May go to Afterlife. They run into a young Inhuman, Kora, outside the compound running away from Li, Jiaying's second-in-command. After securing Kora, Li has Gordon bring Kora and the Agents of S.H.I.E.L.D. back to Afterlife. The two agents convince Jiaying to trust them and help restore Yo-Yo's powers, although Li is still suspicious of them. After conducting tests on her, Jiaying concludes there is no toxin left behind by the Shrike in Yo-Yo's body; instead, the whatever is blocking Yo-Yo's powers must be in her mind. Jiaying wants May to use her empathic abilities to find what is blocking Yo-Yo's powers, but with May not being the most emotionally sensitive person, they do this through sparring. While sparring, Yo-Yo faces flashbacks of the people thinks she failed, culminating with a flashback to herself and her cousin as children hiding in a closet. She reveals that when she was younger, she accidentally got her uncle killed when she hid her grandmother's necklace from a gangster shaking him down for money.

Kora suddenly escapes from Afterlife, leaving her scorched cell and taking her guard's gun. When Yo-Yo and May respond to the commotion, Jiaying and Li reveal Kora is unable to control her volatile powers, and that they were only interested in helping Yo-Yo recover her powers so they could in turn find a way to suppress Kora's. Outside the compound, Nathaniel Malick stops Kora from killing herself by using the powers he stole from Daisy to quake the gun apart. Malick convinces Kora to join him, and embrace her destructive powers as they attack Afterlife. Yo-Yo realizes her powers still aren't working when she can't use them against Malick's goons as they assault the compound. The agents of S.H.I.E.L.D. catch up with Jiaying, Li and Gordon, and together they confront Malick and Kora. Jiaying reveals Kora is her daughter as she tries to convince her to leave Malick's side. Li realizes she's too far gone and tries to kill her, only for Kora to use her powers against him, leaving Li blind with a hideously burned face. Gordon teleports the rest of them to safety on the quinjet. Jiaying and Gordon choose to stay behind and help their people rather than go with May and Yo-Yo to the Zephyr. Before they leave, May gives Jiaying a watch so she'll know where to meet them in the future.

May and Yo-Yo return to the quinjet, even though Yo-Yo still cannot use her Inhuman powers. Mack orders everyone abandon the Zephyr so they don't get trapped in the singularity. As they evacuate the plane, Yo-Yo realizes she doesn't have to bounce back to where she started, and gathers the strength to bring back her speed and fix the time drive. The plane stops leaping forward in time. Daisy goes back into hibernation, while Simmons has Coulson power down for a few hours to fully charge his new body. Enoch, however, soon discovers something else is wrong with the drive, and the plane yet again disappears into the time stream. Back at Afterlife, Malick has Li and the other Inhumans tied up as his prisoners. He promises Kora to use their powers to give the world a taste of anarchy.

Retrieved from "https://marvel.fandom.com/wiki/Marvel%27s_Agents_of_S.H.I.E.L.D._Season_7_8?oldid=5665575"
Community content is available under CC-BY-SA unless otherwise noted.