"As I Have Always Been" 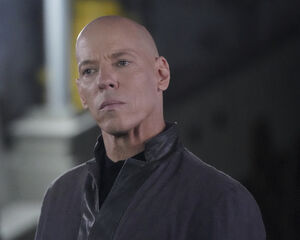 Appearing in "As I Have Always Been"

Synopsis for "As I Have Always Been"

Daisy wakes up from her stasis pod to find the Zephyr trapped in a time storm. As Simmons feared, the Zephyr made a "jump within a jump," sending the plane hurtling towards destruction. Only 94 kilometers separate the plane from total destruction at the vortex of the storm, erasing it and everyone onboard from existence. A radiation flare blinds Mack and traps Yo-Yo on the quinjet. While Simmons tends to Mack's injury, Daisy puts out a fire caused by another radiation flare near the time drive. She sees the time drive start to reboot, and then wakes up back in her pod. Daisy quickly realizes that time is looping over again, but only she remembers the previous loop. The Zephyr is 91km away from the vortex.

Daisy wakes up Coulson after making another loop, and discovers he remembers not only the previous three loops but dozens before that Daisy cannot. Coulson figures only they can remember the loops because they were asleep inside some sort of pod, and that Daisy loses her memory of them every time she dies as she and everyone else on board has countless times before. A few loops later, Daisy and Coulson overhear Deke talking to Simmons about her memory-inhibiting implant. They want her to remove the implant so she can figure out how to fix the time drive before they reach the vortex. When she attempts to remove it, however, Simmons starts to suffocate, and the operating room's locked doors prevent anyone from saving her. In the next loop, Daisy tries to remove the implant for her, only for both of them to die from poison gas leaking into the operating room. Enoch discovers the lines feeding the gas into the room were cut, making this a murder.

The Zephyr is 41km away from the vortex. Much to Coulson's dismay, Daisy goes through the process of discovering the time loops all over again. Once she's brought up to speed, they set about trying to figure out who is trying to kill them. Getting Yo-Yo to discover who cuts the line is impossible because it takes to long to get her out of the quinjet. In the next loop, Sousa dies after he tests Simmons' scanner on himself to see if it is also booby-trapped. Daisy and Coulson hash out their frustrations over having to watch their friends die over and over again in the next loop, during which Coulson figures out Enoch is the murderer. Simmons must have programmed him to automatically prevent anyone from getting to her implant, even if it meant he had to kill his friends - including Simmons. Coulson and Daisy confront Enoch and Simmons with this knowledge, and their theory proves correct when Enoch reflexively attacks Daisy when she attempts to remove the implant.

Daisy and Coulson try to figure out a way to hold of Enoch long enough for them to remove Simmons' implant, all of which fail. Even when the entire crew of the Zephyr comes together to stop him, Enoch can easily fight them off (and kill Deke). Daisy grows closer to Sousa throughout these loops, eventually growing into a mutual attraction. In one loop, they finally trick Enoch into following Sousa into a room where he, Mack, Yo-Yo and May can hold him off long enough for the rest of them to remove the implant - only for the loop to start over. So they do that again but faster, removing Simmons' implant in time for her to reveal how to fix the time drive. One of Enoch's parts will stabilize the time drive, but doing so would be like removing his heart. Simmons' memories overwhelm her before the loop starts over again.

The Zephyr is less than 1km from the vortex. While the team argues over whether Enoch could make the ultimate sacrifice for the team, Enoch suddenly remove the part himself, and hands it over to Simmons and Deke so they can fix the time drive. Coulson and Daisy stay with Enoch while he dies. He warns them that he has seen the future, and that this will be their last mission together. With his last words, Enoch makes one last declaration about his friendship with Fitz. The Zephyr escapes the time storm moments after he dies.

Like this? Let us know!
Retrieved from "https://marvel.fandom.com/wiki/Marvel%27s_Agents_of_S.H.I.E.L.D._Season_7_9?oldid=6498245"
Community content is available under CC-BY-SA unless otherwise noted.