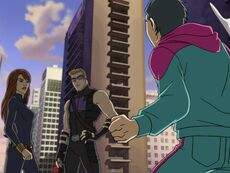 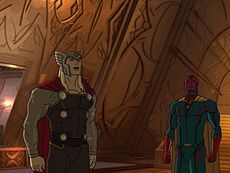 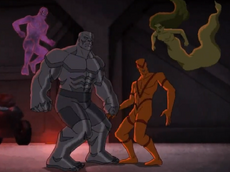 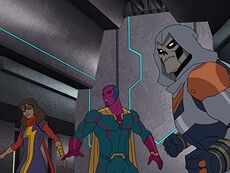 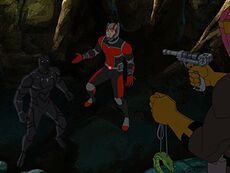 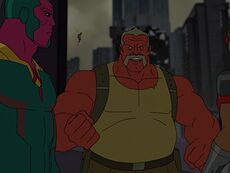 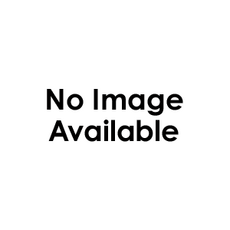 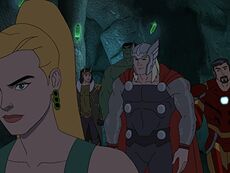 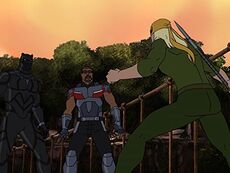 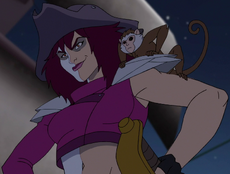 The record-breaking blockbuster film Marvel's The Avengers gave worldwide prominence to the most popular super hero team—Iron Man, Hulk, Captain America, Thor, Hawkeye and Black Widow. Marvel's Avengers Assemble reunites the team, along with newcomer Falcon, marking the first time in animation history this distinct team of heroes will join forces. Led by Iron Man, the heroes train and live together in their new headquarters in Avengers Tower. The planet's most dangerous villains don't stand a chance when the Avengers Assemble - whether they are stopping Dr. Doom from conquering Asgard, Attuma driving the Atlantean Army into New York City or Dracula unleashing vampire hordes, the Avengers must work together to succeed no matter what.

In Season Two, the Avengers face off against Red Skull's master Thanos (who Red Skull gave the Tesseract to at the end of Season One) who is on the hunt for the Infinity Gems to power his Infinity Gauntlet. While the Avengers are able to defeat Thanos after much hard work, the gems are drained of their power by Ultron who threatens to exterminate the human race after possessing Arsenal's body. After the Avengers ultimately defeated Ultron, Ant-Man becomes a new member of the team. There is also a subplot detailing the arrival of the Squadron Supreme, Hyperion's old team from the same planet he's from which also consists of Nighthawk, Power Princess, Doctor Spectrum, and Speed Demon. While Hyperion served as the "Hammer" for the Squadron Supreme, Nighthawk served as the "Architect" of the team. Thought to have perished when their old planet blew up, they survived and came to Earth in an attempt to conquer it with Hyperion re-joining their ranks when he hears of their survival. The Squadron Supreme has plans to become the superheroes of Earth and save the world their way. After Ultron's plans are foiled, they attack the Avengers with full force.

In Season Three, Ultron returns after his apparent demise and seeks revenge on the Avengers. The Avengers must defeat him as well as new threats like Baron Zemo, the Masters of Evil, and Kang the Conqueror. Black Panther, Captain Marvel, Ms. Marvel, Vision, and the Inhumans appearing this season.

The storyline also follows an adaptation of Civil War[1], when the President signs the New Powers Act, the Avengers are given Truman Marsh as their government liaison who will be the one assigning missions to them. After an increase of the Inhuman population done by the Terrigen Mist and the danger caused by them, Truman March enforces every Inhuman to abide by the Inhuman Registration Act that involves Registration Disks placed on them and orders the Avengers to hunt down any Inhuman who resist. As the Avengers disassociate themselves with Truman Marsh, he assembles a new team Mighty Avengers (consisting of Red Hulk, Black Panther, Songbird, Ant-Man, Captain Marvel, Ms. Marvel, and Vision) to enforce the Registration Act, this leads to an all out war between both teams. Howevere, the Registration Act is soon revealed to be a lie, as Marsh reveals himself to have been actually Ultron in disguise manipulating the events to insure the beginning of the Ultron Revolution.

In season four of "Marvel's Avengers Secret Wars", a newly reformed Cabal (consisting of Leader, Arnim Zola, Enchantress, Executioner and Kang the Conqueror) lead by Leader who plans to scatter the captive Avengers across time and space with his Static Expander device. Black Panther forms the newly recruited Avengers that consisting of Ant-Man, Captain Marvel, Ms. Marvel, Vision, and Wasp to rescue them. Even though Leader is defeated, the rest of the Cabal reveal that Leader is not the true leader of the Cabal as they activate the fail-safe that causes the Static Expander to send the captive Avengers across time and space. Before disappearing, Captain America instructs Black Panther's group to continue in their place until they can be found and brought home. Upon the original Avengers return home, they face against the true leader of the Cabal.

The second half of the storyline follows an adaptation of Secret Wars, where the Beyonder has taken parts of various worlds such as Earth, Asgard, and other dimensions, including the one where Tony Stark was stranded, in order to form Battleworld as part of his "experiment". With Iron Man back, the Avengers must find a way to defeat the Beyonder and do so by forming an unlikely alliance with Loki to rebuild the Bifrost Bridge and get everyone back to Earth.

This series was originally set in the same reality as Ultimate Spider-Man, designated as Earth-12041. For the show's fifth season, the series underwent a design style change, bringing it closer to the aesthetic of the new series Marvel's Spider-Man that premiered in 2017. Despite referencing events from previous seasons, the episodes of Black Panther's Quest appeared to take place in the continutiy of the new Spider-Man show, Earth-17628. This change of continuity was consolidado by the guest-appearance of that show's version of Spider-Man in "Vibranium Curtain, Part 2."