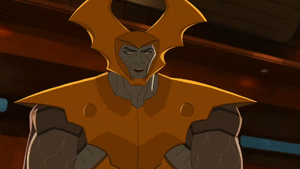 It is said that together, the Avengers can face threats no single hero can. Then, it is only fitting that we, their greatest foes, work together, in order to destroy them.

Appearing in "In Deep"

Synopsis for "In Deep"

Iron Man and Captain America disguise themselves as Grim Reaper and Crossbones (whom the Avengers previously captured) to infiltrate Red Skull's Cabal, but when their disagreements over strategy cause their cover to get blown, they're forced to take on the entire Cabal alone.

Retrieved from "https://marvel.fandom.com/wiki/Marvel%27s_Avengers_Assemble_Season_1_13?oldid=5726521"
Community content is available under CC-BY-SA unless otherwise noted.