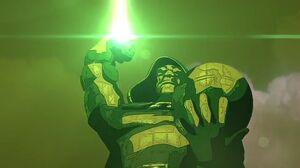 Friends, hear me. Where I come from, some believe humanity to be fragile, weak. Yet I have dedicated my life to this planet because I believe in your strength and honor. I have never regretted my choice, and I do not regret it now. You are better than this, stronger. Resist! Fight!

Thor returns to find Earth under the rule of Doctor Doom, who has changed the past drastically to ensure that the Avengers never formed. Having spent years developing a means of time travel, Doom went into the past and took control of the world, using his knowledge of the future to not only develop advanced technology but also erase the Avengers from history, saving Tony Stark and Bruce Banner from the accidents that would have turned them into Iron Man and the Hulk respectively, keeping Captain America trapped in ice as a sculpture, and enlisting Natasha as the 'Black Bride'. Although Doom believed that he had secured his victory due to humanity's fundamentally low nature, when Thor returned to Earth - immune to the change in history as he was on Asgard at the time - he quickly proved that the Avengers were still the heroes they had been, the group banding together to defeat Doom in the present and send Thor back to the moment when Doom first activated the time machine, Thor subtly sabotaging the machine to make Doom think that it wouldn't work at all.

Peter Parker's Slinger outfit is based on the costume worn by the Spider-Man of the Noir Universe, and Clint Barton's Bullseye costume is based on one of the costumes worn by the Hawkeye of the Ultimate Comics Universe; likewise, Falcon's uniform is also based on his Ultimate counterpart.

Retrieved from "https://marvel.fandom.com/wiki/Marvel%27s_Avengers_Assemble_Season_1_15?oldid=5726527"
Community content is available under CC-BY-SA unless otherwise noted.