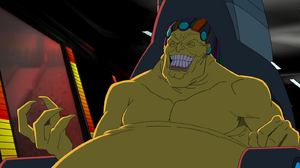 Mojo sends his minions to abduct Hulk where they also abduct Hawkeye in the process. Mojo puts Hulk and Hawkeye into his tournament show "Mojo-Pocalypse" where they are pitted up against the other galactic fighters (including the top fighter Torgo) that are Mojo's prisoners. After Hulk and Hawkeye forfeit one of the fights, Mojo teleports them back to Earth and then plans to destroy it. With help from the other Avengers, Hulk and Hawkeye managed to defeat Mojo who ends up teleporting away from his ship. Torgo tells the Avengers that he will take the prisoners back to their worlds and have a bounty placed on Mojo's head.

Retrieved from "https://marvel.fandom.com/wiki/Marvel%27s_Avengers_Assemble_Season_1_18?oldid=5795982"
Community content is available under CC-BY-SA unless otherwise noted.