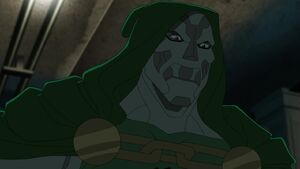 Skull does want me dead, and after his Cabal's recent successes against you and the Avengers, I knew I must do something or risk becoming irrelevant. I used Skull's brashness to my advantage. A risky gambit, I admit, but I had a secret weapon. Captain America. A man who accomplishes miracles through sheer will alone. Now that I have these databases, Skull will not be the only one with Stark's pre-play algorithms, not to mention schematics for countless weapons, access codes to S.H.I.E.L.D.'s computers, and sizable bank accounts. Worth the effort, wouldn't you say?

Appearing in "The Ambassador"

Synopsis for "The Ambassador"

A newscast by J. Jonah Jameson informs the city of Doctor Doom coming to speak before the United Nations. Doom refused membership to the Cabal so now the Red Skull wants him dead. S.H.I.E.L.D. has assigned the Avengers to be his bodyguards as Doom speaks to the UN. The team is there with Fury, he says that Doom only has diplomatic immunity so long as he does nothing wrong. Shortly after Doom begins his address, The Cabal, in the form of Hyperion and MODOK controlling the Super-Adaptoid, attack. Hyperion tears through the Avengers like they’re nothing.As Captain America tries to smuggle the wounded and helpless Doom to safety, more of The Cabal attacks, in the form of Dracula and Attuma. Thor and Hawkeye step up to fight the good fight. When the Red Skull shows up and takes down Captain America, Doom and the Skull fight in public. But later it reveals he wants access to the tower so he can access to the Avengers and SHIELD’s files. Cap and Stark let him download a virus instead before he escapes.

Retrieved from "https://marvel.fandom.com/wiki/Marvel%27s_Avengers_Assemble_Season_1_19?oldid=5795983"
Community content is available under CC-BY-SA unless otherwise noted.