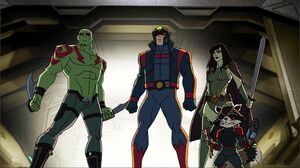 Appearing in "Guardians and Space Knights"

Synopsis for "Guardians and Space Knights"

When the Avengers travel back from a mission to Dimension Z, they arrive home to find Galactus attempting to devour the Earth. Iron Man goes on a solo mission but appears to have been destroyed by Galactus. When the Avengers investigate they learn Iron Man has been transported to a distant planet. The Avengers travelled to the planet and had to deal with the Guardians of the Galaxy. Galactus was led to the D'bari's planet by Iron Man who was under the power of the Power Cosmic to consume it causing the D'bari to evacuate. Even though the Avengers and the Guardians of the Galaxy had a hard time, they then realized that Iron Man led Galactus to the D'bari's planet because it had already become unstable; even before Galactus arrived. The planet's impending explosion knocked out Galactus. After the D'bari found another planet to settle on, Captain America tells Star-Lord that he hopes that their paths cross again.

Retrieved from "https://marvel.fandom.com/wiki/Marvel%27s_Avengers_Assemble_Season_1_22?oldid=5794866"
Community content is available under CC-BY-SA unless otherwise noted.