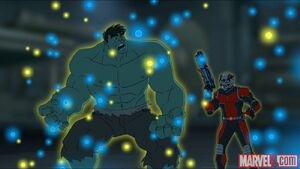 Appearing in "One Little Thing"

Synopsis for "One Little Thing"

While Iron Man and Ant-Man are trying to stabilize Pym Particles that can shrink or grow matter, Falcon gives them terrible news that his Mom Darlene is coming to visit and she has no idea he's an Avenger While Iron Man and Ant-Man work to round up the Pym Particles, the others have to help Falcon convince his Mom that he's still a S.H.I.E.L.D. liaison to the Avengers. The Hulk is occidentally shrank and as Ant-Man tries to rescue him Hulk tries to destroy the particle. The particle is split so blue makes anything shrink while red makes anything grow.

Retrieved from "https://marvel.fandom.com/wiki/Marvel%27s_Avengers_Assemble_Season_1_23?oldid=5795985"
Community content is available under CC-BY-SA unless otherwise noted.