"Ghost of a Chance" 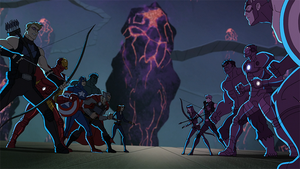 Episode Title
"Ghost of a Chance"

"Space Phantoms"? Seriously, that's what we are calling them?

Appearing in "Ghost of a Chance"

Synopsis for "Ghost of a Chance"

The rookie Falcon is late to his first official Avengers meeting. Iron Man reassures him that the meeting is never on time. He brings the team some cookies made by his mother which the Avengers enjoy especially the Hulk. A fight breaks out for the last few cookies. A Space Phantom swaps bodies with Hawkeye and becomes a copy of him in order to get the Space Phantoms to invade Earth. Falcon goes on the tour of the compound first to his room which was filled with Tony's junk. Then viewing Thor's room that is larger on the inside thanks to Asgardian "inter-dimensional decorating", where he is fighting a Bilgesnipe. Then to Hawkeye's room which is covered in junk. In a strange room he finds shelves filled with crystal animals which is revealed to be owned by the Hulk! Then a Space Phantom swaps bodies with Thor to help secure a portal to guarantee the Space Phantom invasion of Earth. When Iron Man finds Hawkeye and Thor near the portal device, his armor identifies that they have been possessed by Space Phantoms. During Falcon's training with Captain America, a Space Phantom possesses Captain America and attacks Falcon. Iron Man catches up to Falcon and saves him from a Space Phantom-possessed Black Widow. While shutting down Avengers Tower, Iron Man and Falcon are attacked by a Space Phantom-possessed Hulk.

Retrieved from "https://marvel.fandom.com/wiki/Marvel%27s_Avengers_Assemble_Season_1_3?oldid=5230292"
Community content is available under CC-BY-SA unless otherwise noted.