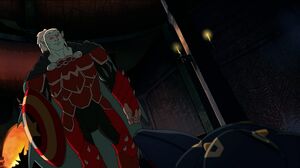 Good evening Avengers, I see you received my invitation.

On the way to Transylvania, Captain America loads silver-plated strike discs into his belt pouches while recounting that Dracula was an uneasy ally of the Allies in World War II, as the Allies helped him keep Transylvania free from the Nazi oppression. The Avengers land outside of Dracula’s castle, which is under a spell which makes it always night. They fight vampires and Dracula, and then split into three groups Thor and Hulk guard the entrance, Iron Man continues to try and find a cure, and the rest enter Castle Dracula to rescue the Black Widow.

Dracula captures Hawkeye and the Falcon, and uses them to force captain America’s surrender. Dracula reveals that the Red Skull has told him that Captain America’s blood, with the Super-Soldier Formula, will make Dracula immune to sunlight. Before he can harm Captain America, other Avengers attack. The Hulk is bitten by Dracula. Hulk becomes a minion vampire under Dracula’s control, and Dracula becomes Hulk-like. Ordering the Hulk to destroy the Avengers, Dracula grabs Captain America once more, but the gamma-irradiated blood from the Hulk incapacitates him.

Gamma-irradiated blood has an effect on Dracula similar to sunlight. Iron Man postulates that if they make the Hulk angry enough, his own gamma-blood will rid him of the vampiric infestation. The Avengers proceed to attack the vampire Hulk, burning out the vampire blood elements. Dracula, weakened, escapes to heal from the damage the gamma-irradiated blood did to him. Castle Dracula is destroyed, and the Avengers fly off in the Quinjet.

Iron Man uses gamma-irradiated blood to help cure the Black Widow, who remembers nothing after being bitten by Dracula.

Retrieved from "https://marvel.fandom.com/wiki/Marvel%27s_Avengers_Assemble_Season_1_5?oldid=5795979"
Community content is available under CC-BY-SA unless otherwise noted.