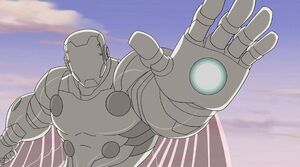 Yeah, there are a few old fashioned things worth keeping around.

Tony shows Steve a computerized video that shows that Steve's current equipment proves little against enemies like Tony himself. Though he is even offered some Iron Man armor, Steve claims that he only needs human ingenuity to win a fight, and he is not backing out due to being a man out of time. Meanwhile, Justin Hammer, Tony's business rival and a member of Cabal, tries to prove his worth to Red Skull, M.O.D.O.K., and the rest of Cabal by building a machine that could take on the Avengers - the Super-Adaptoid. He directly challenged the entire Avengers, and Tony accepts out of irritation.

Hammer's robot was able to copy the abilities and fighting styles of the different Avengers, but proves to be no match for the Avengers and easily gets defeated. Determined to get revenge, Hammer rebuilds it and surprise-attacks the Avengers. By mimicking each members abilities, it was able to defeat each member one by one until only Cap remains. Cap uses the "Avengejet", a spaceplane on top of Avengers Tower that launches into space with the press of a button, and they both go into subspace. The robot continues to fight even in this awkward environment, but it proves worthless against Captain America's human ingenuity and is destroyed. Tony then realizes the importance of sheer gut, and tries to get info from Cap about it (using a notepad to take notes).

Meanwhile, Hammer tries to reason with Cabal, but they hang up on him. Although Justin Hammer has been kicked out of the Cabal, M.O.D.O.K. was able to recover Hammer's technology for his own purposes.

Retrieved from "https://marvel.fandom.com/wiki/Marvel%27s_Avengers_Assemble_Season_1_6?oldid=5230289"
Community content is available under CC-BY-SA unless otherwise noted.