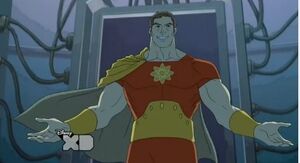 I offered you peace and order!

Hyperion arrived on Earth as it was threatened by large meteors (implied to be the remains of Hyperion's homeplanet). Although the Avengers were able to stop most of the asteroids, Hyperion destroyed the largest one, an "earth-killer", making him the day's hero, even earning the admiration of J. Jonah Jameson. Not long after, Hyperion invited the Avengers, who had taken an interest in the new hero, to his Citadel, where he shared with them his "tragic" story. Hyperion is a superhero from an alien world, where he, along with his team, ruled with an iron fist. When the people rejected his rule, Hyperion destroyed the planet. As the only survivor, Hyperion began his search for a new planet he could "save". However, the Avengers soon saw through his lies and became worried about Hyperion's extreme ways after witnessing him deal with the Wrecker. Although Hyperion was a worthy foe, the Avengers were able to take the rogue hero down, and imprison him in a place where he could never break out.

Retrieved from "https://marvel.fandom.com/wiki/Marvel%27s_Avengers_Assemble_Season_1_7?oldid=5230335"
Community content is available under CC-BY-SA unless otherwise noted.