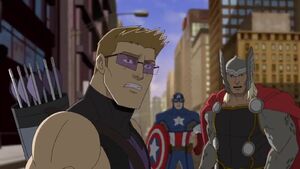 What's it say about being an Avenger when the word "typical" can be used to describe a rampaging monster?

Attuma leads his fellow Atlanteans into riding a tidal wave into Manhattan as part of his plot to conquer the surface world. Iron Man engages Attuma while the other Avengers fight his soldiers. Attuma then heads into the flooded subways as Iron Man changes into his underwater armor to follow Attuma. Captain America and Hawkeye discover strange devices as Iron Man detects a lot of them underground as they are set off in a plot to sink Manhattan by destabilizing the bedrocks of Manhattan. Attuma and his soldiers ends up fighting Captain America, Hawkeye, and Hulk while Iron Man, Falcon, and Thor hold back the tidal wave with an energy barrier. Hulk charges towards Attuma as Thor helps to fight Attuma's soldiers. Hulk then engages Attuma where they are evenly matched until Attuma punches Hulk through the energy barrier that Iron Man and Falcon created to hold back the tidal wave. Thor and Iron Man then attack Attuma where their attacks couldn't harm them. When Attuma and his soldiers retreat into the oceans to find out why Manhattan is rising, they alongside Iron Man find Hulk holding up the island. While Hulk is buying the Avengers some time, the other Avengers fight Attuma who then escapes into the ocean to prevent Hulk from succeeding. Attuma has the advantage in the water over Iron Man and Thor until Hulk gets angry enough to prevent Manhattan's sinking as well as throwing a large rock at Attuma. Attuma is thrown onto land as Hulk manages to defeat him. Following Attuma's defeat, Iron Man repairs the bedrocks beneath Manhattan.

Retrieved from "https://marvel.fandom.com/wiki/Marvel%27s_Avengers_Assemble_Season_1_9?oldid=5726517"
Community content is available under CC-BY-SA unless otherwise noted.