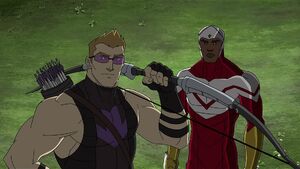 If they don't show up soon, we're gonna have an all-out war. Inside the Aven-Jet.

After the Avengers stop the Wrecking Crew from using weaponry from an abandoned A.I.M. warehouse, Falcon shows Hawkeye his upgraded weaponry for the group where an Asgard rune transports them to Vanaheim. Once there, a Shadow Nyx drained the electricity from it and they are saved by Frey. Falcon must prove to himself and a skeptical Hawkeye that he's still a hero when preventing the Shadow Nyxe from overtaking Vanaheim and restarting the great light that kept them at bay. As a result of Hawkeye and Falcon being transported to Vanaheim, two Shadow Nyx have appeared in Manhattan and the rest of the Avengers must keep them from draining Earth's energies.

Retrieved from "https://marvel.fandom.com/wiki/Marvel%27s_Avengers_Assemble_Season_2_11?oldid=5758540"
Community content is available under CC-BY-SA unless otherwise noted.