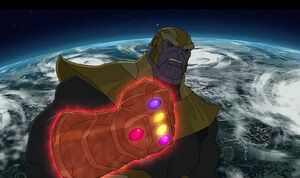 And there came a day, unlike any other, when Earth's mightiest heroes found themselves powerless against a threat too formidable for them to comprehend. On that day, Thanos declared himself supreme ruler of the universe.

With the power and might of all five Infinity Stones finally in his gauntlet, Thanos plans to wield his power over the Universe while the Avengers make a desperate attempt to stop him.

Retrieved from "https://marvel.fandom.com/wiki/Marvel%27s_Avengers_Assemble_Season_2_13?oldid=5795995"
Community content is available under CC-BY-SA unless otherwise noted.