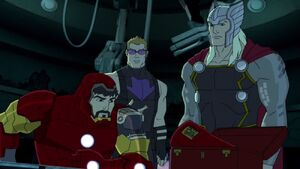 With only half the team on his side and the Avengers Tower destroyed by Ultron, Tony and his new team must seek help from Ant-Man. A.I.M. steals the Pym Particles from Ant-Man. Upon hearing what happened to Stark Tower during the fight with Ultron, Ant-Man allows Iron Man, Hawkeye, and Thor to use his lab within an anthill. His lab is shown to have an A.I. named J.O.E.Y. who is Hank Pym's version of J.A.R.V.I.S. while his flying ant Euclid has taken a liking to Hawkeye. Ant-Man helps out Iron Man, Hawkeye, and Thor to battle M.O.D.O.K. when he uses the Pym Particles to grow out of his cybernetics to keep from being taken over by Ultron. With advice from Ant-Man, Iron Man was able to remove the Pym Particles from M.O.D.O.K.'s body during his attack on an amusement park. After M.O.D.O.K. is left tied up for S.H.I.E.L.D., Ant-Man joins up with Iron Man so that there can be another genius for the Avengers

Retrieved from "https://marvel.fandom.com/wiki/Marvel%27s_Avengers_Assemble_Season_2_16?oldid=5726977"
Community content is available under CC-BY-SA unless otherwise noted.