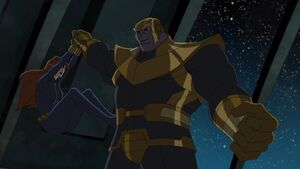 When the Grim Reaper attacked a military base to activate a missile towards the Avengers Tower, Iron Man and Arsenal tried to stop him. The Reaper hit Tony with an electro magnetic pulse, which forced Arsenal to leave the battle and focus on protecting Tony. Once the missile was activated, Tony ordered Arsenal to intercept the missile and absorb its energy to prevent the destruction of Manhattan. Following this event, Tony made Arsenal a full-fledged Avenger. When the Avengers were lured to the Blue Area of the Moon by Thanos, the team brought Arsenal, to use his ability to project the power of the Infinity Stone as a last resort if they couldn't defeat the Mad Titan. Thanos proved to be a challenge for the Avengers. When Tony was thrown to the Watcher's Citadel, he noticed the Watcher could've had some equipment to help Arsenal focus the beam from the Infinity Stone, as it was rather unstable.

Using lenses and other scrap from the Watcher's weapons, Tony built a focuser which made the beam from the Infinity Stone efficient enough to hurt Thanos. However, Thanos possessed the Infinity Gauntlet, an object made to contain the Infinity Stone, and also draw it to him from Arsenal. After recovering the Stone, Thanos set out to destroy the Earth in revenge for the opposition the Avengers showed him. Arsenal recommended to use the absorbed blast from the nuclear missile to defeat Thanos, and Tony, who was in the beginning sceptical because the release would destroy Arsenal, agreed.

While the Avengers distracted Thanos, Arsenal synchronized its frequency with that of the energy of the Infinity Stone, to be able to destroy it. Arsenal then released the nuclear blast to Thanos from behind, and destroyed the Infinity Stone, while the Mad Titan was blasted "half way across the universe." Arsenal's last words were "Goodbye, Tony." Arsenal's head survived the explosion, and was found by the Watcher once it fell on the Moon. It was given to Tony, who put it in his workshop, with the aim to rebuild his robot companion.

Retrieved from "https://marvel.fandom.com/wiki/Marvel%27s_Avengers_Assemble_Season_2_2?oldid=5726551"
Community content is available under CC-BY-SA unless otherwise noted.