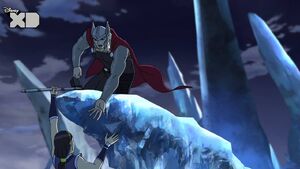 The Squadron Supreme is the enemy of the Avengers. But you and I, we are warriors above all else. So come, let us battle.

Thor is convinced that Zarda wants to defect from Squadron Supreme, but Hulk knows better and must protect Thor from Zarda's duplicitous ways. Zarda amplifies the zoo animals in order to get close to the Avengers claiming that she's trying to switch sides. When Thor finds Zarda on her island, she puts him through her training process. Unbeknownst to Thor, their training is causing tidal waves that threatened Manhattan. When Hulk arrives upon hitching a ride on Mjolnir, he tries to help Thor only to be amplified into a monstrous form by Zarda. Thor manages to help Hulk regain control as he regresses back to normal. Upon the arrival of the other Avengers, Zarda escapes. Upon meeting up with Nighthawk, Zarda tells him that she was wrong about swaying a member of the Avengers to their side.

Retrieved from "https://marvel.fandom.com/wiki/Marvel%27s_Avengers_Assemble_Season_2_22?oldid=5732713"
Community content is available under CC-BY-SA unless otherwise noted.