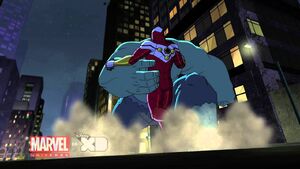 People of Earth, the Squadron Supreme have defeated the Avengers. Now we are your new masters. As you can see, Thor is the only Avenger left. A symbol of their failure. Your world will now make great leaps forward in progress. Crime will not be tolerated. War will not be tolerated. All will obey or be destroyed.

The Avengers are challenged by the fully formed and incredibly powerful Squadron Supreme for a battle that will end with only one team as the victor.

Retrieved from "https://marvel.fandom.com/wiki/Marvel%27s_Avengers_Assemble_Season_2_23?oldid=5734874"
Community content is available under CC-BY-SA unless otherwise noted.