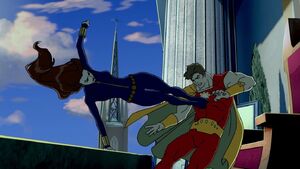 Trick or not, you won't leave here alive.

The Squadron Supreme has taken over Earth where they managed to thwart Atlanteans on Attuma's side, shackle Red Hulk, trap Doctor Strange in a special trap, and keep Spider-Man occupied with one of their robots. Unbeknownst to the Squadron and the rest of the world, the Avengers are in hiding and working on a plan to save the planet and stop the Squadron Supreme once and for all. The Avengers pull a surprise attack on the Squadron Supreme that not even Nighthawk is prepared for. In desperation as part of his contingency plan, he has Hyperion absorb Nuke's powers and orders him to destroy the planet by blowing up it's core.

Zarda, Doctor Spectrum, Speed Demon and Nighthawk are somewhat outmatched by the Avengers they previously antagonised:

Like this? Let us know!
Retrieved from "https://marvel.fandom.com/wiki/Marvel%27s_Avengers_Assemble_Season_2_24?oldid=6498300"
Community content is available under CC-BY-SA unless otherwise noted.