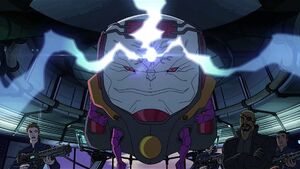 We're failing because we are trying to be something we are not. You're Tony Stark, not Hawkeye. You can take a yo-yo and turn it into a time bomb. If we're gonna win, we need to think outside the box... Or outside the body.

Appearing in "Head to Head"

Synopsis for "Head to Head"

Retrieved from "https://marvel.fandom.com/wiki/Marvel%27s_Avengers_Assemble_Season_2_8?oldid=6005721"
Community content is available under CC-BY-SA unless otherwise noted.