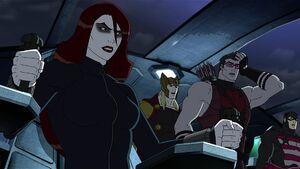 In a flipped reality, where superheroes are supervillains and vise versa, Iron Man gets a strange vision after battling the Squadron Supreme. He and the "evil" versions of the other Avengers discover that the Squadron Supreme have the Reality Infinity Gem, and have used it to change the world in their image. Can the Avengers regain their lost sense of justice and fix reality?

Retrieved from "https://marvel.fandom.com/wiki/Marvel%27s_Avengers_Assemble_Season_2_9?oldid=5726573"
Community content is available under CC-BY-SA unless otherwise noted.