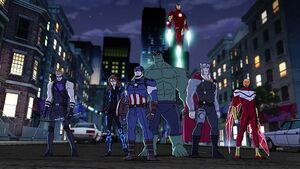 Appearing in "Adapting to Change"

Synopsis for "Adapting to Change"

Following a fight with the Masters of Evil members Beetle, Goliath, and Screaming Mimi, the Avengers learn what it is like to work as a team again as they battle a new and improved Adaptoids that were developed by A.I.M.'s Scientist Supreme. The Adaptoids were developed through a combination of the Super-Adaptoid technology and some unknown space metal.

Retrieved from "https://marvel.fandom.com/wiki/Marvel%27s_Avengers_Assemble_Season_3_1?oldid=5798843"
Community content is available under CC-BY-SA unless otherwise noted.