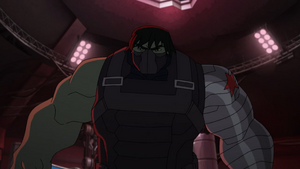 Yelena! You may have been the top of your class, but a Widow never stops learning and adapting. And fighting! There's room for two of us, there's room for all of us.

After Hulk and Black Widow defeat Abomination, Hulk is ambushed by Hydra Agents and regressed to Bruce Banner enough to be captured. Upon alerting Captain America and Iron Man upon trailing the Hydra Agents to Siberia, Black Widow discovers that Baron Strucker has reactivated the Red Room program where she meets his student Yelena Belova. Black Widow also discovers that Baron Strucker is using the Winter Soldier program to turn Hulk into the Winter Hulk.

Like this? Let us know!
Retrieved from "https://marvel.fandom.com/wiki/Marvel%27s_Avengers_Assemble_Season_3_14?oldid=6498315"
Community content is available under CC-BY-SA unless otherwise noted.