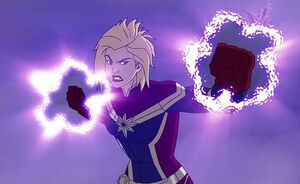 Captain America, Thor, and Falcon join Captain Marvel when it comes to a group of Kree soldiers led by Galen-Kor who are planning to give the recently-emerged Inhumans to the Kree Empire and even plan to give them Captain Marvel as a bonus. Outside of the Avengers having to thwart Galen-Kor's plot, they also have to prevent the Kree from using a missile that would emit a dangerous gas on Earth.

Retrieved from "https://marvel.fandom.com/wiki/Marvel%27s_Avengers_Assemble_Season_3_16?oldid=5762157"
Community content is available under CC-BY-SA unless otherwise noted.