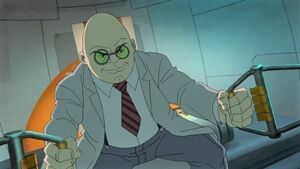 In a world of evil, these heroes are the mightiest. Iron Guy. Colonel America. Viking King. The Bulk. Eyehawk. Dark Spider. Every team needs a great leader. This team has the Human Ant. Will it be enough against the alien robot army, and the evil Lava Men?

Appearing in "Ant-Man Makes It Big"

Synopsis for "Ant-Man Makes It Big"

On the set of a superhero motion picture called "Human Ant and the Revengers," Hawkeye and Black Widow team up with Ant-Man to stop the disgruntled prop master Egghead from destroying Los Angeles with living robots, sentient Lava Men suits, and autopilot egg exo-suits. Meanwhile, Thor takes actor Tad McDodd who is portraying Viking King around to see what it was like to be Thor.

Retrieved from "https://marvel.fandom.com/wiki/Marvel%27s_Avengers_Assemble_Season_3_18?oldid=5763425"
Community content is available under CC-BY-SA unless otherwise noted.